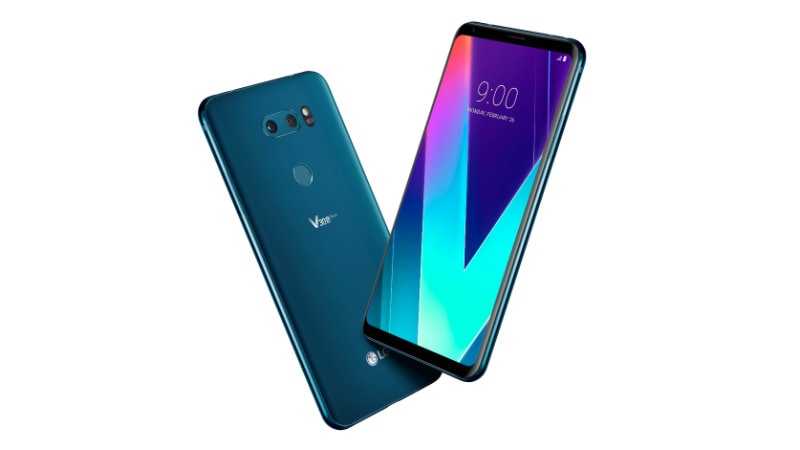 LG V30S ThinQ has officially been unveiled just ahead of Mobile World Congress (MWC) 2018. As LG revealed earlier this month, the new smartphone is the successor to last year's LG V30 and is designed with new artificial intelligence (AI) powered technologies to sit against the competition that is expected become tougher with the arrival of the Samsung Galaxy S9 and Galaxy S9+. The latest V series handset also features LG's ThinQ AI-powered brand that was expanded at CES 2018 last month and already featured on some smart TV models. Alongside the LG V30S ThinQ, the LG V30S+ ThinkQ was also unveiled, sporting twice the inbuilt storage. Price and availability details of the LG V30S ThinQ are yet to emerge.

AI CAM is designed to analyse subjects in the frame and recommend optimal shooting mode among eight categories, namely portrait, food, pet, landscape, city, flower, sunrise, and sunset. QLens, on the other hand, allows users to scan QR codes to improve the online shopping experience. It is claimed to give information as to where to buy the product online at the lowest price as well as recommend users of similar items. This is something that Samsung is already offering through its Bixby assistant and the recently developed Samsung Mall app. Further, the QLens feature offers detailed information of landmarks such as buildings and statues. Notably, Google Lens is already offering similar features.

LG has also considered low-light photography improvements as one of the areas to offer through the V30S ThinQ. Thus, the handset comes preloaded with a Bright Mode that is touted to use some algorithms to brighten shots by a factor of two, without increasing noise levels. Huawei is already providing a similar experience through its AI tweaks.

LG has also brought Voice AI to the V30S ThinQ, first unveiled at CES earlier this with the new ThinkQ range of products. The proprietary technology is designed to run apps and change settings using voice commands. It also works with Google Assistant. LG lately revealed some of its exclusive voice commands that will be incorporated to enhance the Voice AI functionality.

The hardware side of the LG V30S ThinQ is similar to the original V30 model, though there are some advancements to uplift the overall user experience, such as 6GB of RAM compared to 4GB on the previous model, as well as twice the inbuilt storage on the base variant. The LG V30S ThinQ is acclaimed as the thinnest and lightest among smartphones with displays of 6 inches or more. Plus, there is a tough build that is touted to have passed US Military's 14 MIL-STD 810G tests. The smartphone comes with a new Moroccan Blue colour option that features a green tint, while a new Platinum Gray colour sports elegant looks.

The Android 8.0 Oreo-based LG V30S ThinQ has UX 6.0+ interface and features a 6-inch QHD+ (1440x2880 pixels) OLED FullVision display with 18:9 aspect ratio. The smartphone has a Qualcomm Snapdragon 835 SoC, coupled with 6GB of RAM. For taking still images and recording videos, there is a dual camera setup on the back that comprises a 16-megapixel primary image sensor with f/1.6 aperture, 71-degree lens, and a 13-megapixel secondary image sensor with a wide-angle, 120-degree lens along with f/1.9 aperture. A 5-megapixel camera is available on the front with a wide-angle, 90-degree lens that has a f/2.2 aperture.

As we mentioned, LG is offering the standard V30S ThinQ with 128GB of onboard storage, while a V30S ThinQ+ variant is also available with 256GB of internal storage. Both variants support storage expansion via microSD card (up to 2TB). The smartphone has 4G LTE, Wi-Fi 802.11 a/b/g/n/ac, Bluetooth 5.0 (BLE), NFC, and USB Type-C 2.0 (3.1 compatible). It also has a rear-facing fingerprint sensor and packs a 3300mAh battery that supports Qualcomm Quick Charge 3.0 technology and wireless charging. Besides, the handset measures 151.7x75.4x7.3mm and weighs 158 grams.