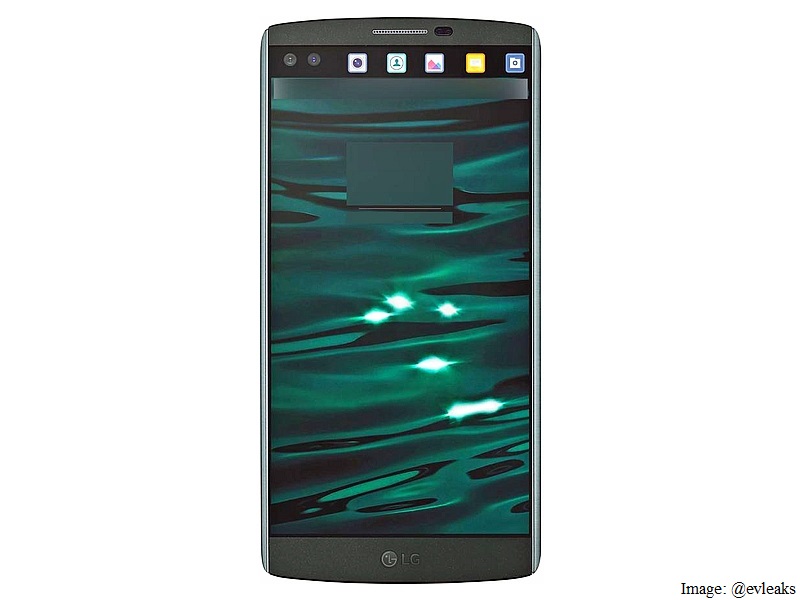 The LG V10 rumoured dual-screen smartphone has popped up online in a leaked image, ahead of its expected October 1 launch. The image showing the front-facing panel of the smartphone also gives us a glimpse of the secondary 'auxiliary ticker display' placed on top of the main screen of the device.

The image leaked by @evleaks on Tuesday shows the secondary display of the smartphone filled with five app shortcuts including those for camera, contacts, messages, and gallery. Two front-facing camera sensors can be seen besides the secondary display. The sensors and the speaker grille are placed above the secondary display. At the bottom, the unannounced V10 sports the LG logo with no capacitive or physical buttons, all of which hint towards the inclusion of on-screen buttons.

The 'auxiliary ticker display' of V10 is also said to be used to show RSS feed updates, text messages, and other notifications, similar to how Samsung utilised a similar feature in the Continuum handset. In the Samsung Continuum, users were offered a small rectangle display below the regular display and on-screen keys.

The LG V10 smartphone was recently also spotted in a Tenaa (Chinese telecom certification authority) listing tipping some of the innards of the handset including model number as the LG-H968; a 5.7-inch QHD display with the 'auxiliary ticker display' placed above it; Qualcomm Snapdragon 808; 3GB of RAM, and 64GB of inbuilt storage. The LG V10 was also listed to sport a 16-megapixel rear camera and a 5-megapixel sensor up top. Other features included a fingerprint sensor, a microSD card slot, and 64GB of internal storage.