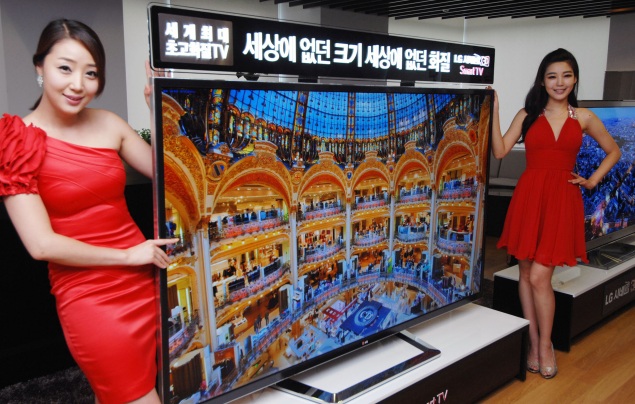 2013 is definitely going to be a year of 1080p displays for many devices. With HTC taking the lead with the J Butterfly and the still rumoured HTC M7, China's ZTE and Sony are in close pursuit with the Nubia Z5 already launched and the Sony Xperia Z in the making.

The latest company to join the club is LG, which is planning to showcase full-HD displays for multiple devices. Let's take a look at what visitors will get to see at the LG booth at CES 2013.

Smartphones and Tablets
Displays seem to have become a key aspect to consider when it comes to smartphones. And add to that the full-HD experience on a handheld. LG appreciated this fact and considered launching new smartphones with full-HD displays earlier this year. But now it's going much further next year's CES.

The Korean manufacturer will be featuring a 4.7-inch mobile display with approximately a 1mm bezel, providing a solution for users to comfortably grip a large-sized phone in one hand. In addition to this, it will be showing off a 5.5-inch phablet with 1080p display with 403 ppi. Could this be a second phablet apart from the currently rumoured Optimus G2?. It's something we'll have to keep our eye on.

In addition to this, LG will also be launching a 7-inch tablet screen with 1920x1200 resolution translating into 324ppi pixel density.

Ultrabooks and laptops
LG will also be unveiling a 12.9-inch QSXGA display (2560x1700) for ultrabooks, a resolution generally seen in 20-inch and over premium monitors. For those keeping score at home, that's more pixels than Apple's 2560x1600 13-inch Retina MacBook. LG will also showcase a 13.3-inch laptop screen sporting a slim design at just 2mm.  All displays for ultrabooks, tablets and phablets will make use of AH-IPS technology.

Monitors and Televisions
A 23.8-inch monitor from the Neo-Blade series will also be seen at the event featuring an "ultra-narrow bezel". Additionally, a 4K2K 30-inch PC monitor packing in 4096x2160 pixels will also be unveiled. LG claims this is the highest resolution computer monitor to date.

Coming to televisions, LG has already announced new Google TV models that will make an appearance at the event. Apart from these, the company is expected to reveal ultra high definition TVs incorporating proprietary FPR 3D technology.

These include the "world's first 84-inch UHD Interactive Whiteboard for classrooms", a futuristic 47-inch transparent display, a 47-inch high brightness display perfect for outdoor signage use, a video wall composed of nine 55-inch FPR 3D panels. A 65-inch UHD TV is also on the cards.