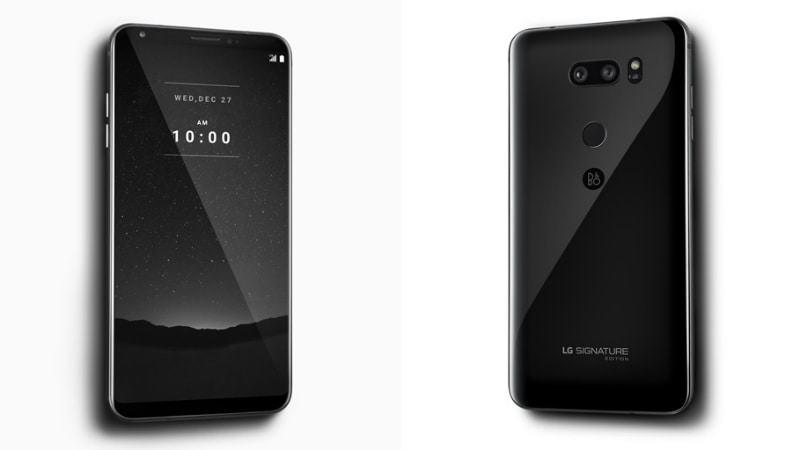 Following in the footsteps of Chinese vendors including OnePlus and Xiaomi, LG has unveiled the Signature Edition as its limited edition model exclusively for the customers in South Korea. The LG Signature Edition sports a Zirconium Ceramic-made shell that is touted to be scratch-proof and comes in Black and White colour options. Also, LG is providing an option to let customers have their names engraved on the back of the smartphone.

If we minus the top-notch build from the LG Signature Edition, it has the hardware of the V30 that the South Korean giant unveiled at IFA 2017 in August. The smartphone has a 6-inch OLED FullVision display with QHD+ (1440x2880 pixels) resolution. There are 6GB RAM and 256GB onboard storage and a dual-camera setup with a wide-angle lens. Further, the handset runs Android 8.0 Oreo and comes preloaded with LG Pay integration. It packs a 3300mAh battery that supports Qi wireless charging.

LG hasn't revealed any details about the processor of the Signature Edition. However, it is likely to be the same Qualcomm Snapdragon 835 SoC that is powering the LG V30. The smartphone is also expected to have connectivity options such as 4G, Wi-Fi 802.11 a/b/g/n/ac, Bluetooth v5.0 with BLE, NFC, and USB Type-C 2.0 with compatibility for USB Type-C 3.1.

To attract early buyers, LG has announced that only 300 Signature Edition smartphone units will be available. The company is also bundling a special after-sales service and a B & Q wired earphone and a B & O Bluetooth headset. But it is yet to see how these complimentary offerings would help to persuade customers opting the over-priced smartphone.

LG isn't the only company that has developed a limited edition smartphone to garner more revenues and to reach the posh audience. Xiaomi launched the all-ceramic version of its Mi Mix 2 to give a premium option to customers looking to buy the bezel-less smartphone. OnePlus also brought some limited edition of its flagship models in the recent past to stand out in the competition, and the recently revealed OnePlus 5T Star Wars edition is one such model. It is coming to India next week.