LG has filed a trademark with EUIPO (European Union Intellectual Property Office) for the name.

A render of LG's upcoming rollable smartphone had recently surfaced

LG Rollable might be the name of the company's upcoming experimental rollable smartphone. LG has filed a trademark with EUIPO (European Union Intellectual Property Office) for the name. Of course, a trademark does not mean that the company will use this for the name; it might just want to protect the term so other brands can't use it to describe their phones. The smartphone is expected to be the second under LG's “Explorer Project”, after the LG Wing, and will be launched in March 2021, as per a recent report. The trademark doesn't reveal much more, but does potentially give us the name of the upcoming phone.

The application was filed on November 2 by Mitscherlich, a company from Germany that has filed trades on behalf of LG in the past as well. The name chosen by LG seems to be quite straightforward and self-explanatory. The application mentions that LG Rollable is a smartphone, but doesn't offer any more details. The trademark listing was first spotted by LetsGoDigital 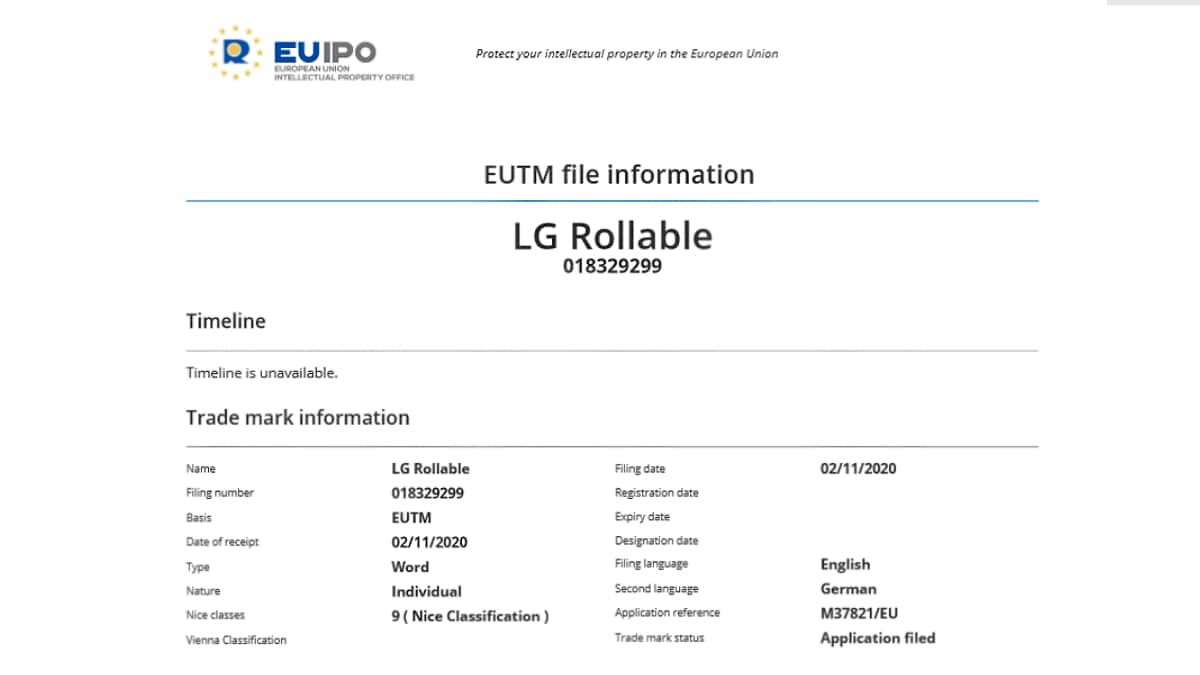 A trademark has been filed for LG Rollable with EUIPO

A render of the smartphone had surfaced earlier this week, which shows a rollable display that can be extended from either sides of the phone. The render was based on a patent LG had filed for a phone with a flexible display that can be rolled into its casing. The patent was filed with USPO (United States Patent and Trademark Office) in August of last year.

This will be the second smartphone under LG's experimental “Explorer Project.” The first, LG Wing, is a dual-screen smartphone with a swivel main display that was launched in September. LG Rollable, meanwhile, is expected to be launched in March 2021.

The rollable smartphone was referred to as Project B, and was earlier slated to launch in June 2021, according to company sources as per a report. In the same report, company sources had said that developing rollable phones was relatively less complicated than foldable phones.

Further reading: LG Rollable, LG Project B, LG, Explorer Project
Tanishka Sodhi Email Tanishka
Tanishka Sodhi is a sub-editor at Gadgets 360. As a journalist, she has covered education, culture, and media and mental health. She is interested in the intersection of technology and culture, and its impact on everyday lives. Tanishka is a staunch advocate of gender equality, and the correct use of commas. You can get in touch with her via Twitter at @tanishka_s2 or drop a mail at tanishkas@ndtv.com. More
Assassin’s Creed Valhalla Price, Release Date, Gameplay, Review, PC System Requirements, and More
Nokia 6300, Nokia 8000 Key Specifications Leaked, Tipped to Run on KaiOS