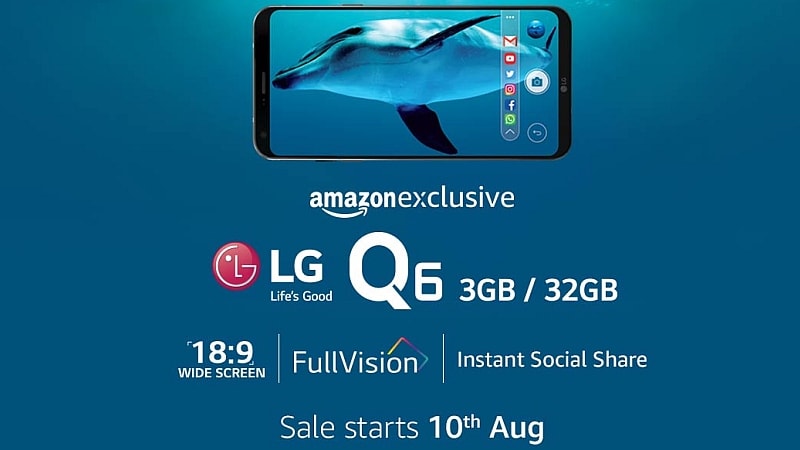 LG Q6, amongst the first Q-Series phones launched by the South Korean company last month, is coming to India this week. The company's exclusive online retail partner Amazon is teasing the Thursday, August 10 launch and sales start date of the smartphone on its website, even detailing that the 3GB RAM + 32GB storage variant of the LG Q6 will be made available on the marketplace. More importantly, the e-commerce website has teased the LG Q6 price in India, saying it will launch at less than Rs. 20,000.

To recall, the Q-Series bring a lot of premium features seen in the flagship G-Series in a more affordable package, and the LG Q6 bears the FullVision display with a 18:9 aspect ratio. It also comes with a face unlock feature, apart from Knock Code. The LG Q6 variant launching in India also supports dual-SIM cards, and runs on Android 7.1.1 Nougat.

As we mentioned, the LG Q6 sports a 5.5-inch FullVision (1080x2160 pixels) IPS display, and is powered by a Snapdragon 435 octa-core SoC coupled with 3GB of RAM. It sports a 13-megapixel rear camera on and a 5-megapixel front camera. The 32GB of inbuilt storage can be expanded via the microSD card slot.

To recall, the LG Q6 was launched alongside the LG Q6+ and the LG Q6a, both of which featured the exact same design but different RAM and inbuilt storage configurations. Colour options at launch included Astro Black, Platinum, Marine Blue, Terra Gold and Mystic White. The LG Q6 price in India is expected to be kept in the mid-range segment, however, the company has yet to detail pricing anywhere at the moment.

Game of Thrones Season 7: What’s With That Dagger?
YouTube Nurtured Comedians In India. Now Its Rivals are Having the Last Laugh.