LG Optimus G2 spotted in video ahead of launch 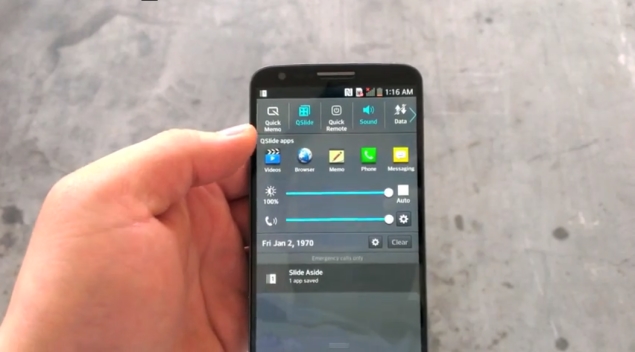 LG may be a month away from unveiling the successor of its Optimus G, but thanks to YouTube channel 4Leakz, the device is now fully revealed.

The upcoming flagship model of the South Korean electronic major follows the similar round-edge design as LG manufactured Nexus 4, as seen in the leaked video. As rumoured, and seen in some of the leaked images earlier, the phone will have the sleep and volume keys located on the back panel beneath the camera. Further, bottom of the front panel houses the LG logo instead of a physical home button, as is usually the case.

According to 4Leakz, the successor to LG Optimus G will run Android 4.2.2 and has the model number LG-D803. The rumoured specifications of LG Optimus G2 include a 2.3GHz quad-core Snapdragon 800 processor with 2GB RAM and a 13.0-megapixel rear camera. Some reports also suggest that the display stands at 5.2-inches and is full-HD.

Earlier we reported that LG has sent out invitations for an event on August 7 in New York. LG is expected to announce the Optimus G2 at the event.

Recently, the company also released a promotional video which had no visuals of the device but has little hints. Earlier, the company had confirmed that the Optimus G2 will be powered by Qualcomm's Snapdragon 800 processor.

Last week, LG Optimus G2 was spotted in fresh leaked images. However, most of them were blurred images and not much could be concluded from them. The video, however, showcases the LG Optimus G2 in all its glory and can be seen below.