Now that Apple iPhone 6s and iPhone 6s Plus are out of the way, the tech community has started shifting its focus towards the two rumoured Nexus smartphones supposedly being made by LG and Huawei. As a part of the latest leak, the LG-made Nexus handset being tipped as Nexus 5 2015 and Nexus 5X, has been leaked in a Black colour variant. Slightly earlier, another image showed the right-edge of the same smartphone - this time in a White colour variant. The handset specifications have been tipped once again, alongside.

The leaked image by an Italian website, Glistockisti (via GSMArena) shows a dark coloured Nexus 5 2015. It is said to have been taken from a leaked LG presentation slide. The image, besides showing the front and back panel of the handset, also shows the device codename as 'Project N3', which is understandable as this will be LG's third Nexus device after Nexus 4 and Nexus 5. The image showing the back panel falls in line with the past renders and images leaked online. The display shows Google Search on top and other Google apps such as Fit, Google+, Gmail, Music, Newsstand, Drive and others, at the home screen. 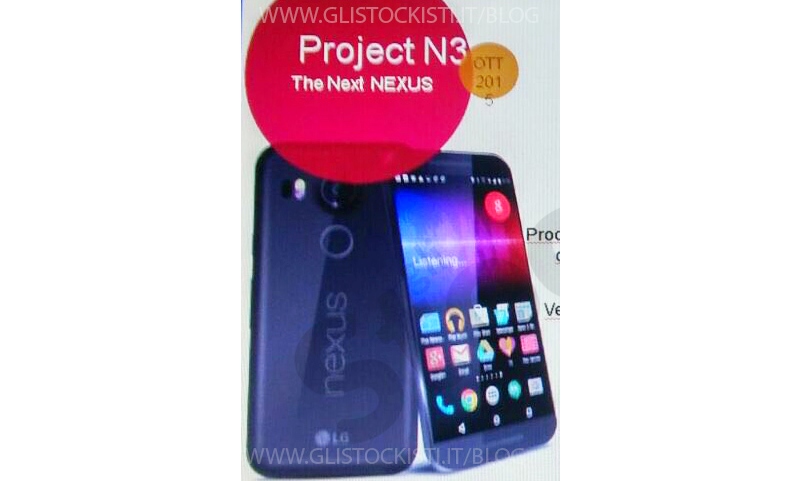 Recently the white-colour variant of the LG Nexus 5 2015 again showed up on the Web displaying the right side bezel featuring both the power button and the volume buttons. This however, is a slight change of design as compared to the original Nexus 5 smartphone. The original 2013 version sports the volume button on the left, while the power button and the SIM tray is on the right. The image comes courtesy AndroidPit, which earlier this week leaked the image showing the back panel of the smartphone.