The new LG L Fino, a smartphone that was announced alongside the L Bello in August, has been listed on the company's India site with pricing. There is no official word on the availability details of the L Fino; though, we expect that the company will announce the availability of the smartphone in coming days. Earlier this week, the LG L Bello was officially listed at Rs. 18,500, and the G3 Stylus at Rs. 21,500. All three smartphones are available to purchase via various e-commerce sites however. 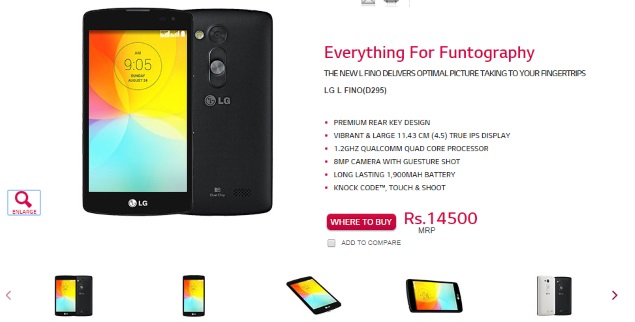 The company had confirmed the global roll-out of LG L Fino in September, starting with Brazil and then followed by other countries - Latin America, Europe, Asia and the Commonwealth of Independent States (CIS).

While globally announcing the L Fino, the company had stressed that the smartphone is targeted at emerging 3G markets.

The Android 4.4.2 KitKat-based LG L Fino comes with a UX derived from the LG G3. Some of the highlights of the G3-derived UX skin include Touch and Shoot feature that clicks images by tapping anywhere on the display to focus and shoot in one single step; Gesture Shot in the camera allows users to open and close a hand in front of the lens to start a three-second countdown for the shutter, and Front Camera Light, which helps clicking images in self-portrait mode.

Other features include Knock Code, which was first introduced on the LG G2 that allows users to unlock the phone by tapping a personalised 'knock' pattern on the display. The new LG L Fino also support the new QuickCircle cases that were launched alongside the flagship G3 (Review | Pictures).

The smartphone comes with dual-SIM (Micro-SIM) support. In terms of specifications, the LG L Fino comes with a 4.5-inch WVGA (480x800 pixels) IPS display offering a pixel density of 207ppi; a 1.2GHz quad-core processor; 1GB of RAM; 4GB of inbuilt storage with expandability via microSD card (up to 32GB); an 8-megapixel rear camera; a 0.3-megapixel front camera; a 1900mAh battery, and 3G support.

The LG L Fino measures 127.5x67.9x11.9mm and will come in White, Black, Gold, Red, Green colour variants with availability that will vary by market.