LG on Wednesday launched a new K-Series smartphone in India, as it had announced earlier this week. While the LG K3 (2017) and LG K4 (2017) were expected to launch, the company has launched a brand new phone instead - the LG K7i. The biggest highlight of the smartphone is its 'Mosquito Away' technology. The LG K7i comes with an additional rear cover bundled in the box that can be placed on the phone when required - it features a speaker that produces ultrasonic frequencies said to drive mosquitoes away. The smartphone is otherwise a budget offering, and runs Android Marshmallow. The LG K7i was launched at the side-lines of Day 1 of the India Mobile Congress, being held in New Delhi.

The LG K7i price in India is Rs. 7,990, and the smartphone will be available across retail outlets in the country. The company has not detailed any launch offers for the smartphone, which will be made available in its Brown colour variant in India. Commenting on the launch, Amit Gujral, Chief Marketing Officer, LG Electronics India, said "LG has always been at the forefront of unique innovations. With this launch, LG is bringing the mosquito away technology closer to the consumers in the form of a mobile device which can be an integral part of their daily lives." 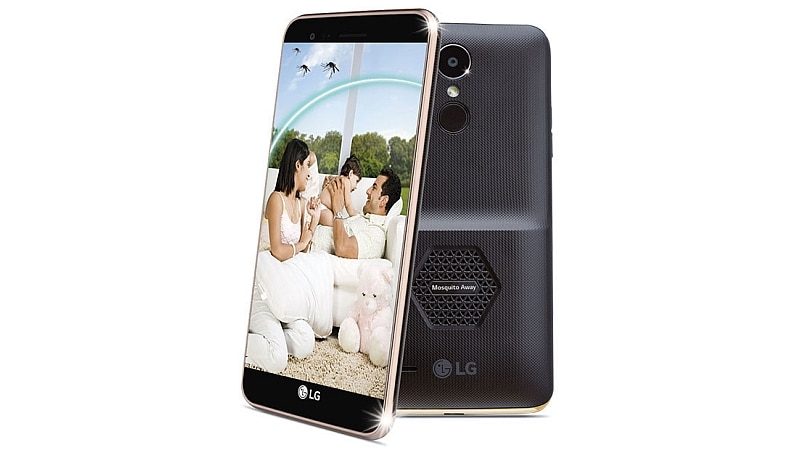 As we mentioned, the highlight feature of the LG K7i is its Mosquito Away technology, which uses 30KHz ultrasonic sound waves - said to be harmless to humans - to drive away mosquitoes. The company adds the smartphone has no "harmful chemicals", and neither were any used in developing it. The technology, which is enabled by the speaker on the additional rear cover, does not require any refills, LG adds. The smartphone can be placed on a stand when the mosquito repellent is activated, as seen below.

As for the LG K7i specifications, the dual-SIM smartphone runs Android 6.0 Marshmallow. It sports a 5-inch OnCell display, and is powered by an unspecified quad core processor coupled with 2GB of RAM.