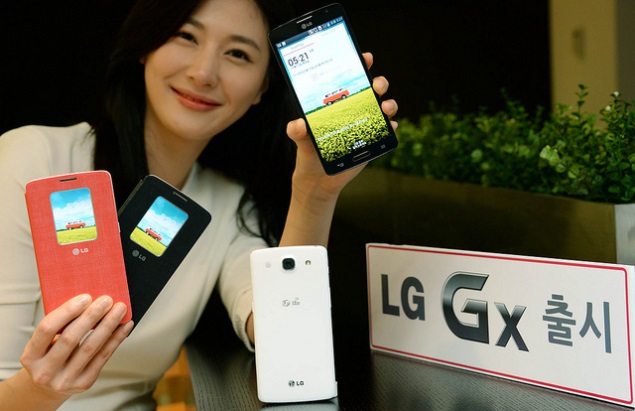 LG seems to be in no mood to rest after the laurels earned by its flagship smartphone, the LG G2, as the company has now launched the LG Gx.

LG announced its new entrant in G series at an event in Korea and also confirmed that the phablet will be initially available in Korea only, with no word on global availability. Further, the South Korean handset maker has not revealed the prices for the LG Gx.

The newly launched LG Gx packs almost identical specifications to the LG Optimus G Pro. The new LG phablet runs Android Jelly Bean with no word on the exact version. It features with 5.5-inch IPS full-HD display with a resolution of 1080x1920 pixels. The LG Gx is powered by a quad-core Snapdragon 600 processor (unspecified clock speed) along with 2GB of RAM.

It sports a 13-megapixel rear autofocus camera and also houses a 2.1-megapixel front-facing camera. The LG Gx includes 32GB of inbuilt storage, which is non-expandable. It comes with dimensions 150.6x76.1x9.2mm and weighs 167 grams. Much like the LG Optimus G Pro, it packs a 3,140mAh removable battery. Connectivity options on the phablet include Wi-Fi, Bluetooth, Micro-USB, NFC, 3G and LTE. The LG Gx will be available in two colours - Black and White.

The LG Gx comes with some preloaded apps that have been seen on devices like the LG Optimus G Pro and the flagship, the G2. Some of the popular preloaded features included in the new phablet are KnockON, Pause and Resume Recording, QRemote, QSlide, QuickMemo and QTranslator.