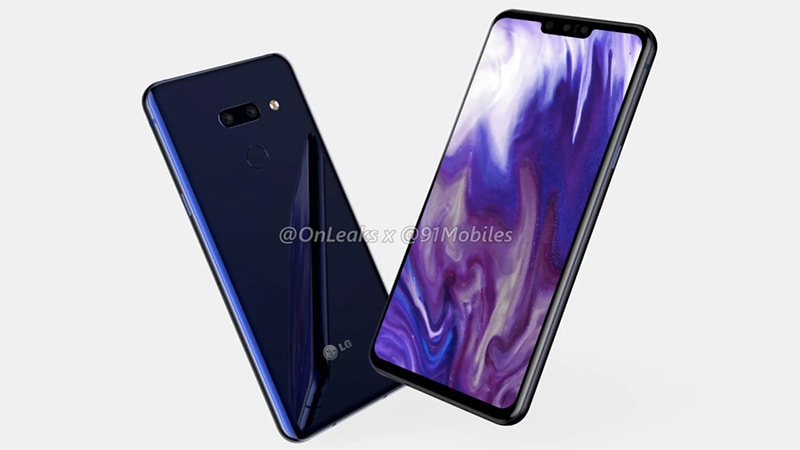 As LG gears up to launch its latest smartphone, the V40 ThinQ in India, rumours around its upcoming smartphone, the LG G8, have started doing the rounds. The G8, like the name suggests, will be the 8th flagship from LG's G series of smartphones. It will be the successor to the LG G7+ ThinQ which is currently LG's flagship offering in the country. Looking at the latest leak, it may be safe to say that LG has plans to launch the smartphone at the upcoming MWC 2019 in Barcelona, Spain.

The leaked renders, shared by OnLeaks in collaboration with 91Mobiles, suggest that with the LG G8, the South Korean company is following the same design language as the LG G7+ ThinQ. The renders show the smartphone sports a glass-sandwich design with a metal frame in the middle. There are a few design changes at the back though. The dual camera setup is now positioned horizontally compared to the vertical positioning of its predecessor. It also seems to be missing the laser autofocus sensor but it could have been moved inside the camera module between the two lens.

The dimensions of the phone are said to be roughly 152x72x8.4mm. The leak also suggests that the smartphone will have a USB Type-C port, 3.5mm headphone jack and a loudspeaker at the bottom. LG has positioned the SIM tray and the power button to the right while the volume buttons and a dedicated Google Assistant button is to the left. There seems to be an additional hole above the volume button which can be a microphone hole or a secondary speaker.

While the LG G8 has been leaked earlier, the specifications of the smartphone are relatively unknown. It is still unclear if the device will support 5G cellular connectivity. Another leak suggested ‘sound on display' speakers which would be similar to an under-display cantilever-conduction speaker. OnLeaks cites a person familiar with the matter to claim this feature is confirmed to be a part of the LG G8.