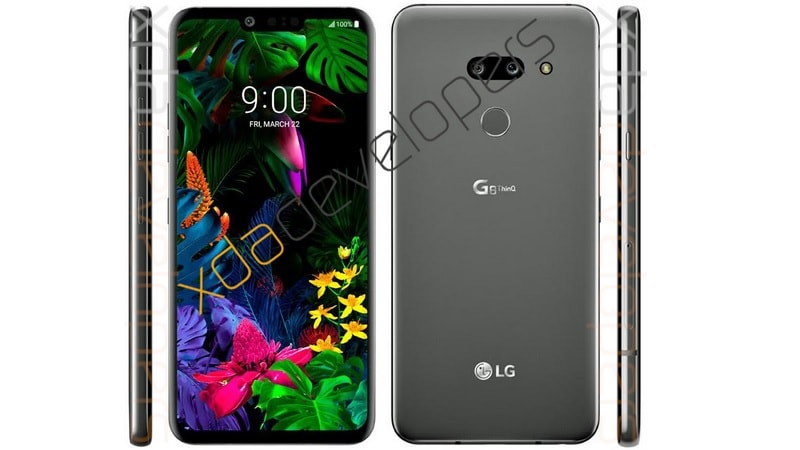 The LG G8 will reportedly feature a rear-mounted fingerprint sensor

LG has scheduled an event on February 24 at MWC 2019 where the company is expected to launch the flagship LG G8. Ahead of its official announcement though, alleged press renders of the LG G8 have surfaced online that give us an early look at what LG's next G-series flagship will look like. While the latest leak reveals some key design elements such as the presence of a notch, a dual rear camera set-up and what appears to be a metallic build, nothing much has been revealed when it comes to the hardware specifications of the upcoming smartphone.

The latest LG G8 leak, which comes courtesy of XDA-Developers, claims to show the official press renders of the LG G8 ahead of its expected launch at MWC 2019 next month. The freshly leaked LG G8 renders, which depict the smartphone in a grey colour option, look quite similar to another set of renders that were leaked earlier this month, showing the upcoming smartphone flaunting a glossy rear panel in deep blue shade. What's interesting to note here is that both the leaks seemingly confirm the presence of a notch and a dual camera setup on the back with the exact sensor and LED flash alignment.

But unfortunately, the fresh LG G8 leak does not reveal anything about its hardware specifications, except the fact that its dimensions will reportedly measure in at 152 x 72 x 8.4mm. If previous leaks are anything to go by, the upcoming LG flagship will sport a 6.1-inch display with 19.5:9 aspect ratio. Moreover, it will reportedly retain the 3.5mm headphone jack and will feature a USB Type-C port and bottom firing speakers.

The LG G8, which is reportedly codenamed Alpha, will feature a rear-mounted fingerprint sensor and a dedicated Google Assistant button, as is clearly evident from the newly surfaced renders. Speculations are rife that the LG G8 might come equipped with the latest high-end SoC from Qualcomm, but with LG having already confirmed the launch of a Snapdragon 855-powered 5G smartphone next month, some reports suggest that the company might go with the Snapdragon 845 SoC for the LG G8. But these are just rumors and speculations at best, so do take them with the proverbial hint of salt and wait till LG officially announces the upcoming smartphone.