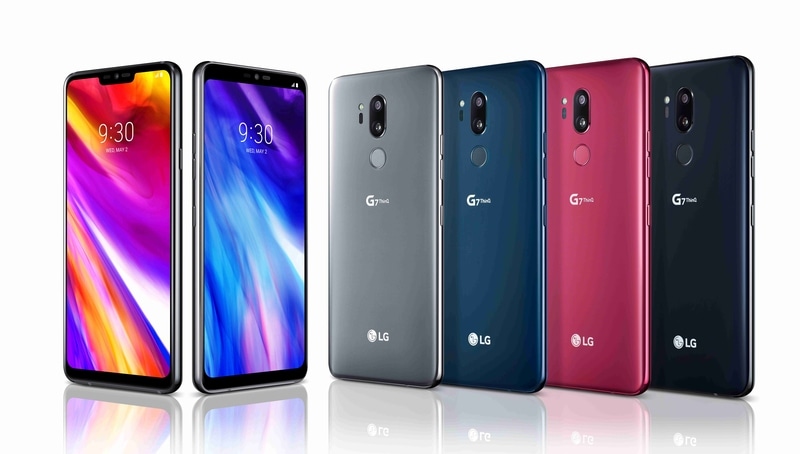 LG unveiled the G7 ThinQ smartphone earlier this month with AI and face recognition features. UK and Europe prices were revealed soon after, and now LG is beginning its official rollout in home market South Korea. The tech giant has also confirmed that the smartphone will soon release in Asia, America, and Europe.

LG will make the LG G7 ThinQ available in South Korea in New Aurora Black, New Moroccan Blue and Raspberry Rose colour options. The 4GB RAM/ 64GB storage variant is priced at KRW 898,700 (roughly Rs. 56,500) and the LG G7+ ThinQ with 6GB RAM/ 128GB storage option is priced at KRW 976,800 (roughly Rs. 61,390). The LG G7 ThinQ will be available in South Korea from May 18, and launch offers are detailed on a dedicated page. Asian markets will see the smartphone rollout sometime in the end of May or early June.

In the US, Verizon will start taking pre-orders from May 24, US Cellular will start selling it from June 1, and Sprint pre-orders will begin from May 25. T-Mobile is said to bring the smartphone on its network later this spring.

Apart from RAM and storage variants, there's no other difference between the G7 ThinQ and G7+ ThinQ. The dual-SIM LG G7 ThinQ runs Android 8.0 Oreo out-of-the-box, and sports a 6.1-inch QHD+ (1440x3120 pixels) FullView Super Bright display with a 19.5:9 aspect ratio and brightness of up to 1,000 nits. The company is also boasting of a 100 percent DCI-P3 colour gamut. The G7 ThinQ is powered by the latest Qualcomm Snapdragon 845 SoC, coupled with 4GB of LPDDR4X RAM on the G7 ThinQ and 6GB RAM on the G7+ ThinQ.

In the camera department, the LG G7 ThinQ features a dual rear camera setup with a 16-megapixel primary Super Wide Angle sensor that has f/1.9 aperture and a 107-degree wide-angle lens, and another 16-megapixel secondary sensor that comes with f/1.6 aperture and a 71-degree lens. On the front, the handset gets an 8-megapixel wide-angle sensor with f/1.9 aperture and 80-degree lens. There is 64GB of inbuilt storage on the G7 ThinQ and 128GB on the G7+ ThinQ. Both variants have expandable storage via microSD card (up to 2TB). A 3000mAh battery powers the internals from under the hood.

YouTube Music Streaming Service to Be Launched on May 22, YouTube Red to Be Rebranded as YouTube Premium
Microsoft Said to Plan Low-Cost Surface Tablet Line to Rival Apple's iPad