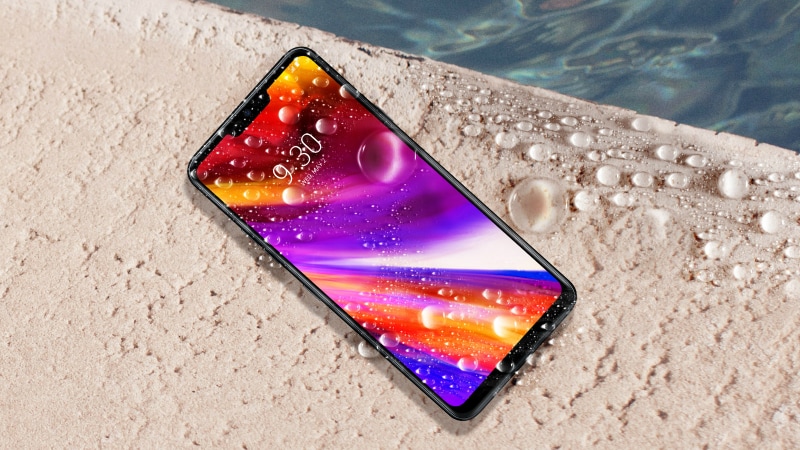 LG G7+ ThinQ will be available for purchase in India exclusively through Flipkart starting August 10.

LG G7+ ThinQ was launched in India on Monday. Announced globally in May, the new smartphone that comes as the successor to last year's LG G6+ comes with an artificial intelligence (AI) powered dual rear camera setup and includes a dedicated button to trigger Google Assistant and Google Lens. LG has also provided an all-new, 1000-nit FullView Super Bright display with a 19.5:9 aspect ratio. The LG G7+ ThinQ also has an IP68-rated build that is based on MIL-STD 810G standard. Plus, there is a Boombox Speaker along with Hi-Fi Quad DAC to deliver an enhanced audio experience. The smartphone comes with a price tag of Rs. 39,990. LG also brought the G7 ThinQ alongside the G7+ ThinQ in May, but there is no word on the India launch of the former.

The LG G7+ ThinQ price in India has been set at Rs. 39,990. The handset will go on sale exclusively through Flipkart starting August 10. This will notably be alongside the Flipkart Big Freedom sale.

The dual-SIM (Nano) LG G7+ ThinQ runs Android 8.0 Oreo and features a 6.1-inch QHD+ (1440x3120 pixels) FullView Super Bright display that supports a 19.5:9 aspect ratio and brightness of up to 1,000 nits. There is also a 100 percent DCI-P3 colour gamut. LG has provided an octa-core Qualcomm c SoC, paired with 6GB of LPDDR4X RAM. The dual rear camera setup of the G7+ ThinQ has a 16-megapixel primary sensor along with an f/1.9 aperture lens that has a field of view of 107 degrees. There is also a 16-megapixel secondary sensor that has an f/1.7 aperture, 71-degree lens. For selfies, the handset has an 8-megapixel sensor at the front along with a wide-angle, f/1.9 aperture lens. LG has offered AI CAM features that bring 19 shooting models and three preset effects. Similarly, the rear camera setup supports Bokeh effect and Live Photo mode.

The LG G7+ ThinQ has 128GB of onboard storage that is expandable via microSD card (up to 2TB). In terms of connectivity, there is 4G VoLTE, Wi-Fi 802.11ac, Bluetooth v5.0, GPS/ A-GPS, NFC, USB Type-C, FM radio, and a 3.5mm headphone jack. Sensors on board include a face recognition sensor and a rear-facing fingerprint sensor. The smartphone also has a 7.1-channel DTS:3D Surround Sound support along with a Boombox speaker and Hi-Fi Quad DAC. Besides, it packs a 3000mAh battery and measures 153.2x71.9x7.9mm.

"The G series received a great response last year with the launch of LG G6 and to further enhance the smartphone experience, we are proud to introduce LG G7+ThinQ in India," said Advait Vaidya, Mobile Business Head - Mobile Communication for LG India, in a statement while announcing the new launch. "Along with power-packed feature list, the smartphone is incorporated with Artificial Intelligence technology that increases the level of real-time engagement for customers. With this addition to the G series range, we hope to continue to the momentum of providing our customers class-leading products."