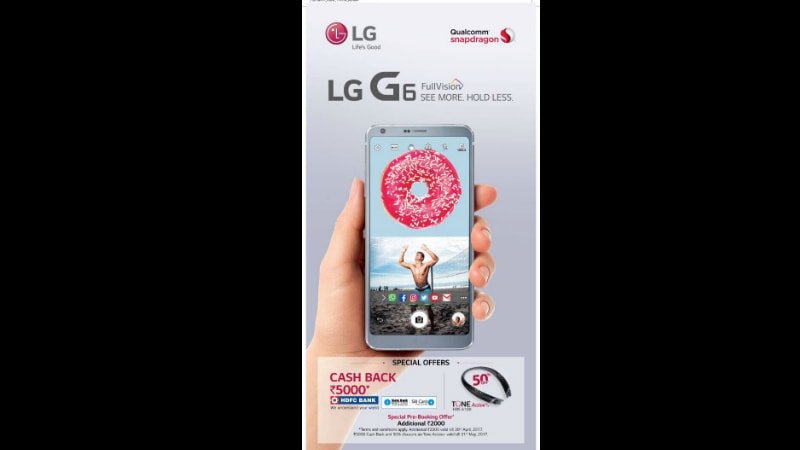 LG G6 was initially launched at MWC 2017 in Barcelona, and earlier this week, the company started taking pre-registrations. Now, according to an established retailer, the LG G6 will reportedly go on pre-orders from Friday till April 30, and all pre-ordered customers can grab the Tone active+ at 50 percent off and can even avail a cashback of up to Rs. 7,000 from selected banks. Also, the price of the LG G6 in India is expected to be between Rs. 53,000 to Rs. 54,000.

Mumbai-based retailer Mahesh Telecom, citing promotional material, has tweeted this information; however, there is no official word from LG India about it. To recall, the LG G6 was made available in South Korea at a price of KRW 899,800 (roughly Rs. 51,200). The LG G6’s highlight feature on the smartphone is its 5.7-inch QHD+ (1440x2880 pixels) FullVision display with an 18:9 (or 2:1) aspect ratio instead of industry standard (16:9). The phone was launched with the new UX 6.0 that company said has been optimised for the 18:9 aspect ratio. The smartphone is powered by Qualcomm Snapdragon 821 SoC coupled with 4GB of LPDDR4 RAM.

The LG G6 was launched in two storage variants - 32GB and 64GB. The storage on the LG G6 is expandable via microSD card (up to 2TB). In terms of optics, the new LG flagship smartphone comes with a dual-camera setup at rear end with two 13-megapixel sensors - one for wide-angle shots with 125-degree lens and f/2.4 aperture, and the other for regular shots with 71-degree lens and OIS 2.0. At front, the G6 features a 5-megapixel wide-angle lens with f/2.2 aperture and 100-degree lens.

The LG G6 houses a non-removable 3300mAh battery. This is a departure from the company's earlier devices that usually featured removable batteries. It measures 148.9x71.9x7.9mm and weighs in at 163 grams. LG G6 supports LTE-A 3 Band CA network and in terms of connectivity options, it includes Wi-Fi 802.11 a/b/g/n/ac, Bluetooth v4.2, NFC, and USB Type-C 2.0 connectivity options.

Notably, the phone was touted to be the “first smartphone with supports Dolby Vision” at the time of its launch by LG. It features a 32-bit Hi-Fi Quad DAC (digital to analogue converter) for enhanced audio playback as well. The phone packs a fingerprint scanner at the back as well. Another distinction is that it has passed the MIL-STD 810G military standard certification for durability.

HTC U 'Squeezable Phone' Set to Launch on May 16