Share on Facebook Tweet Snapchat Share Reddit Email Comment
LG India, ahead of its 2015 flagship G4 smartphone launch on June 19, has revealed the pricing of the handset. The LG G4 is now listed on the company's India site at an MRP of Rs. 51,500. So far, there has been no official announcement of the smartphone

Interestingly, the official price listing of the G4 smartphone ties up with the claims of a Mumbai-based retailer who last week suggested a price of Rs. 51,500. Additionally, a third-party online retailer last week also started selling the dual-SIM variant of the LG G4 at Rs. 49,999.

The LG G4 official India listing also confirms that the South Korean will be launching the Dual SIM (Dual LTE) variant of the flagship with model number H818N. The company however is not clear whether it will market and launch the G4 in India with the original name or with Dual SIM (Dual LTE) suffix. 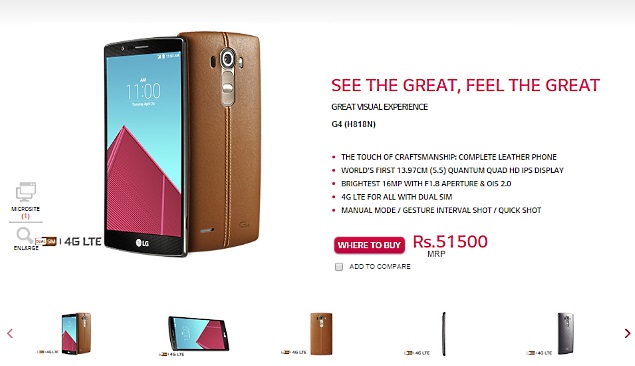 The specifications of the LG G4 Dual SIM and LG G4 Dual SIM (Dual LTE) are identical to the original LG G4, except for the inclusion of an extra SIM card slot. Notably, both the SIMs support 4G connectivity.

For interested consumers, LG India is taking pre-orders for the G4 smartphone till June 15, and pre-order customers stand the chance to receive the handset directly from Bollywood actor Amitabh Bachchan. The company is also offering few assured gifts for consumers who pre-order the G4, including a LG G4 Metallic Finish Back Cover worth Rs. 2,000 inside the box; free one-time screen replacement worth Rs. 6,500, and free extra battery with charging cradle worth Rs. 3,500.