LG late on Monday started sending press invites for an event scheduled for April 28 where the company appears likely to launch its next flagship smartphone, the LG G4.

The South Korean company confirmed that the event will take place in New York, London, and Paris on April 28 followed by an April 29 launch in Seoul, Singapore, and Istanbul. The official invite doesn't give away too much about the event and just says, "See the great, feel the great," with the G capitalised and featuring the same font as LG's G series brand. Also considering that LG launched the G3 flagship back in May last year in similar simultaneous events across the world, we can expect that April 28 event will see the unveiling of the LG G3's successor. 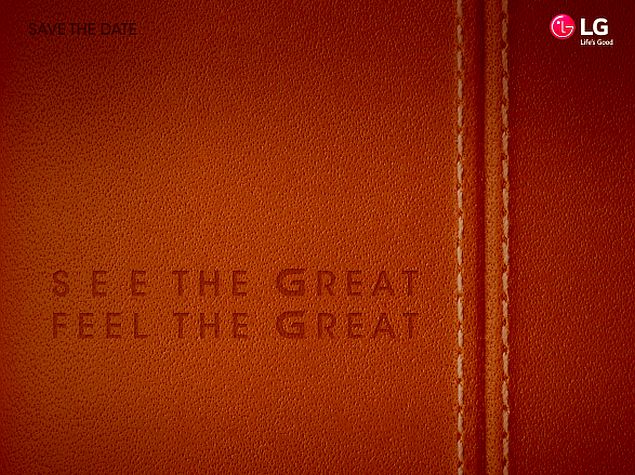 The invite also features a leather background indicating that the new LG G4 might sport a leather rear case. We will have to wait till April 28 to see what LG has up its sleeves.

In other news, LG's upcoming G4 flagship is said to have been spotted in benchmark results. As seen on GFXBench (via GSMArena), a smartphone dubbed LG G4 (F500x) is listed with Android 5.1 Lollipop; a 5.5-inch QHD (1440x2560 pixels); 3GB of RAM; 32GB inbuilt storage; a 16-megapixel rear camera, and an 8-megapixel front camera. The GFXBench results show that the handset will be backed by a hexa-core 64-bit Snapdragon 808 processor. The Qualcomm Snapdragon 808 SoC was launched last year alongside the octa-core Snapdragon 810 processor. Based on previous reports, the LG G4 is likely to be the first smartphone featuring the company's brand new UI - LG UX 4.0.

A report earlier this month suggested that the flagship G4 launch was pushed to April to avoid an MWC clash with the Samsung Galaxy S6 and Galaxy S6 Edge, and was said to be 'radically different' from the current flagship the LG G3.