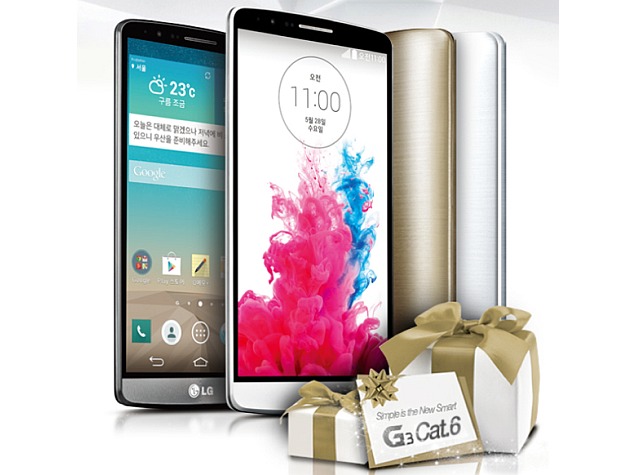 While LG has not confirmed the Prime-variant of the G3, it has followed in Samsung's footsteps, and released a LTE-A version of its G3 flagship for Korea only.

Called the LG G3 Cat.6, the smartphone has been listed on the LG Bestmall website, the company's shopping portal for South Korea.

While the name may not be LG G3 Prime the handset, just like the Samsung Galaxy S5 LTE-A, almost definitely features a Qualcomm Snapdragon 805 chipset powering it, with the Cat.6 denoting LTE-A speeds of up to 300Mbps (peak download rates), something the Snapdragon 801 processor (with its Cat.4 LTE modem) cannot offer.

The LG G3 Cat.6 smartphone, just like the Samsung Galaxy S5 LTE-A, is not expected to be available outside of Korea, and while most of the rest of the world could have enjoyed the faster processor, the faster LTE speeds are available in very few markets.

For now, no specifications have been provided by LG, and the phone is only up for pre-order right now, with a 'notify me' option noting details of interested users. No pricing or availability is available either. However, specifications are expected to be identical to the LG G3, excluding the chipset.

The G3 sports a 13-megapixel rear camera with OIS+, dual-LED flash and a laser auto focusing sensor, while also including a front-facing 2.1-megapixel camera with f/2.0 aperture, and a selfie mode. The LG G3 is powered by a 3000mAh removable battery, and features wireless charging support.