LG's UK site has now listedthe G3 handset with model number D855 as 'coming soon'. The South Korean giant however, has not detailed the innards of the device and has also not posted any press renders of the LG G3 apart from a small listing image showcasing the circular Quick Window interface.

The LG G3 is all set to launch on May 27 in three cities - London, New York, San Francisco - followed by a May 28 launch in Singapore, Istanbul, and Seoul. 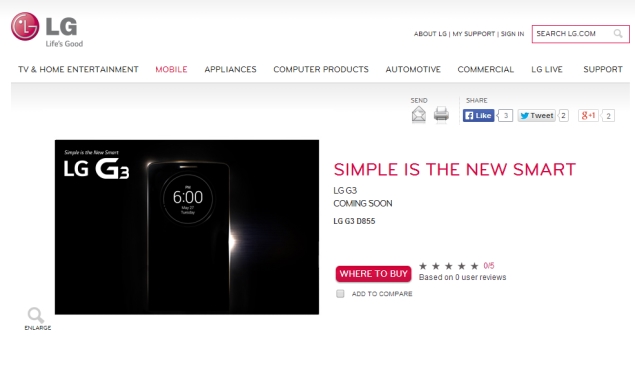 LG's G3 teaser video featured the tagline "Simple is the New Smart", and showed the smartphone partially without revealing the overall design. The video confirmed what we have been seeing in previous leaks that had tipped a rear-button interface with two volume keys and a circular power button in the middle, and the camera accompanied by a dual-LED flash on top. The LG G3 is also seen sporting curved edges at the corners in the teaser video and rather thin bezels.

So far, the only confirmed LG G3 specification is its 5.5-inch QHD (1440x2560 pixels) resolution display, with a staggering 534ppi pixel density. This would make the smartphone quite a bit G3 larger than its predecessor, the LG G2 (Review | Pictures).

The G3 has also been said to feature a 13-megapixel rear camera with the new Optical Image Stabilisation (OIS+). Beside the rear mounted speaker offering 1W output, the handset is reportedly backed by a 3000mAh battery capacity.