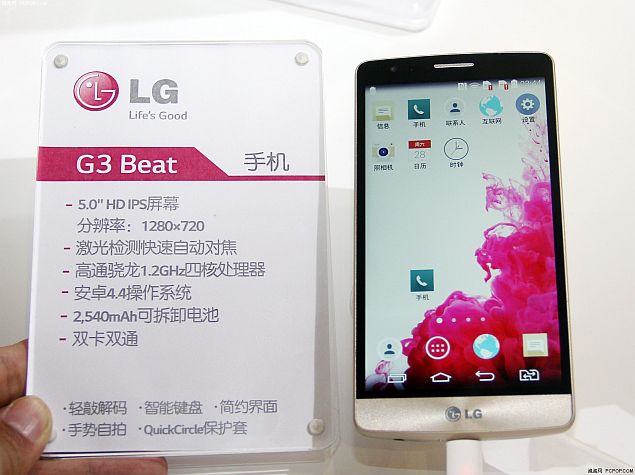 LG has introduced the LG G3 Beat at the Tianyi Mobile Phone Trade Exhibition in China, as an exclusive for China Telecom. Notably, the device is expected to be called the LG G3 mini when it is launched globally, however, its 5-inch display does seem to belie the claim, unless LG has given a new definition to what we call 'mini' variant of a smartphone.

With no word on its price and availability, the LG G3 Beat (LGD728) comes with a 5-inch IPS display, contrary to the 4.5-inch display expected on th LG G3 mini. The firm has also dropped the screen resolution from QHD (1440x2560 pixel) on LG G3 to the considerably lower HD resolution of 720x1280 pixels on the LG G3 Beat.

Slashgear, however reports that the LG G3 Beat showed at the expo has a 2-megapixel front-facing camera besides the rear laser autofocus sensor seen on the G3. The smartphone is also said to sport the QuickCircle cover case. The handset also shares the same faux brushed metal design.

To recall, a similar handset with codename "LGD722" was spotted recently at the Indian import/ export site Zauba, and was speculated to be the G3 mini.

LG last week revealed its global roll-out plans for the G3 smartphone. The handset will roll-out in various Asian markets starting from June 27 in Hong Kong, Indonesia, Singapore, and the Philippines, followed by the rest of Asia, Europe and the Middle East among other regions in July.

Unfortunately, there is still no word on the pricing and specific details of availability of the LG G3 as the company said it will be announced locally at launch time.