Both the smartphones are now listed on the company's official site with pricing; however, there is no word yet on availability details. The LG F60 has been listed at Rs. 15,000, while the LG L45 Dual is listed at Rs. 6,500.

The LG F60 was initially announced in early October and was expected to be rolled out in Europe followed by Asia and the Americas.

The F60 comes with dual-SIM support and is targeted at new 4G LTE smartphone users. The Android 4.4.2 KitKat-based LG F60 features a UX derived from the LG G3 (Review | Pictures). Some of the features of the G3-derived UX skin include the Touch and Shoot feature, which clicks images by tapping anywhere on the display to focus and shoot in one single step, and Gesture Shot in the camera allows users to open and close a hand in front of the lens to start a three-second countdown for the shutter. Other features include Knock Code, which was first introduced on the LG G2 and allows users to unlock the phone by tapping a personalised 'knock' pattern on the display. 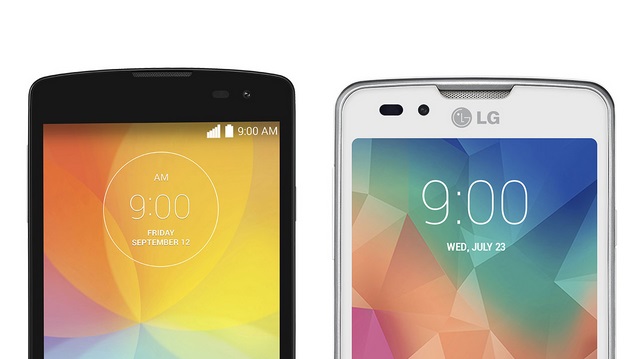 The LG F60 features a 4.5-inch WVGA (480x800 pixels) True IPS LCD display and offers a pixel density of 207ppi. It is powered by a 1.2GHz quad-core (unspecified chipset) Qualcomm processor coupled with 1GB of RAM. It comes with 4GB inbuilt storage that's expandable via microSD card (up to 32GB). The smartphone sports a 5-megapixel rear camera with BSI sensor and LED flash, apart from a 0.3-megapixel font camera. The LG F60 is backed by a 2100mAh removable battery, measures 127.5x67.9x10.6mm, and weighs around 130 grams. The smartphone will be available in Black and White colour variants. Apart from LTE, the smartphone supports 3G, GPRS/ EDGE, GPS/ A-GPS, Wi-Fi, Bluetooth, and Micro-USB.

The LG L45 Dual, on the other hand, is a budget device and is based on Android 4.4 KitKat. It comes with dual-SIM support. Other specifications include 3.5-inch TFT display with 320x480 pixels resolution; a 1GHz dual-core processor; 512MB of RAM; 4GB of inbuilt storage that's expandable via microSD card (up to 32GB); a 5-megapixel fixed-focus camera; a 0.3-megapixel front camera, and a 1540mAh battery.