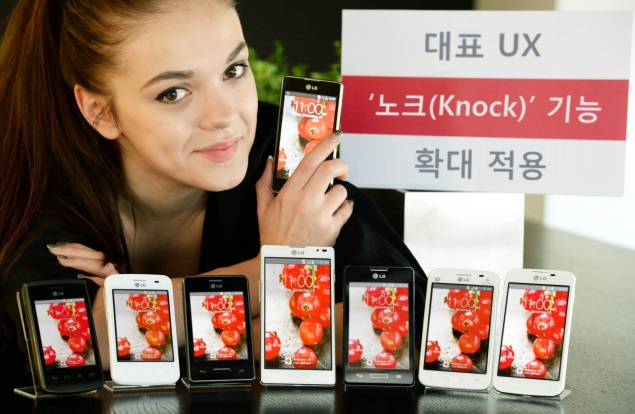 LG has announced that it will introduce the Knock feature, previously dubbed KnockON, as a standard feature in the company's L series II smartphone line-up.

The company claimed that a global maintenance software release will be released in January for the current LG L series II smartphones, which will include the Knock feature. However, the company notes that the availability and specific models to receive the Knock feature will vary according to region and mobile carrier. LG has also not revealed the number of smartphones that will receive the update.

Commenting on the announcement, Dr. Jong-seok Park, President and CEO of LG Electronics' Mobile Communications Company said, "Knock is distinctively an LG UX and a great example of what happens when you marry the latest in mobile technology with consumer-centric insights. No one ever thought that a power button needed to be improved until our engineers wondered why they couldn't turn the entire screen into a power button."

The Knock feature was introduced on company's flagship smartphone, the LG G2 and is company's version of double tap to unlock and even lock the phone. Later, the feature was included in LG's G Pad 8.3 tablet followed by the G Flex curved display smartphone. We recently reviewed the LG G Pro Lite, which also had the feature.

LG launched the LG G2 globally back in August. The LG G2 features a 5.2-inch full-HD (1080x1920) display, with a pixel density of 423ppi. It is powered by Qualcomm's quad-core Snapdragon 800 processor that's clocked at 2.26GHz. The device comes with 2GB of RAM and offers 16GB and 32GB storage options. The LG G2 comes with a unique design that features the power buttons and the volume rocker at the back of the phone, below the rear camera, instead of the sides of the phone, as is usually the case.