Lenovo Z6 Pro will arrive with a waterdrop-style display notch

Lenovo Z6 Pro is set to debut in China officially on Tuesday, April 23. But hours ahead of the launch, a list of teasers confirming the key specifications of the Z6 Pro have been released. The new phone is confirmed to be arriving with an in-display fingerprint sensor and a waterdrop-display notch. The Lenovo Z6 Pro is also seen with a quad rear camera setup in its latest teaser video. Lenovo has provided a Snapdragon 855 SoC on the Z6 Pro with 12GB of LPDDR4x RAM. The new series of teasers has also confirmed a 32-megapixel selfie camera and a 4,000mAh battery on the Lenovo Z6 Pro.

Starting with the promotional video that has been shared on the official Lenovo Mobile Weibo account, it clearly shows the front and back of the Lenovo Z6 Pro. The video confirms the presence of a waterdrop-style display notch on the Z6 Pro. Also, it highlights an in-display fingerprint sensor as well as face unlock support.

At the back, the Lenovo Z6 Pro appears to have a quad rear camera setup and a gradient back -- the same that appeared on the pre-order page last week.

Separately, Lenovo VP Chang Cheng has posted a couple of images confirming the key specifications of the Z6 Pro smartphone. One of the images reveals that the phone has a combination of 48-megapixel, 16-megapixel, 8-megapixel, and 2-megapixel sensors at the back. There is also a 32-megapixel selfie camera.

The image also confirms that the Lenovo Z6 Pro has a 6.39-inch display and is powered by the octa-core Snapdragon 855 SoC, paired with 12GB LPDDR4x RAM and 512GB of onboard storage. There is also a mention about 4,000mAh battery as well as ZUI 11 based on Android Pie. Furthermore, the phone appears to have Dolby audio integration. 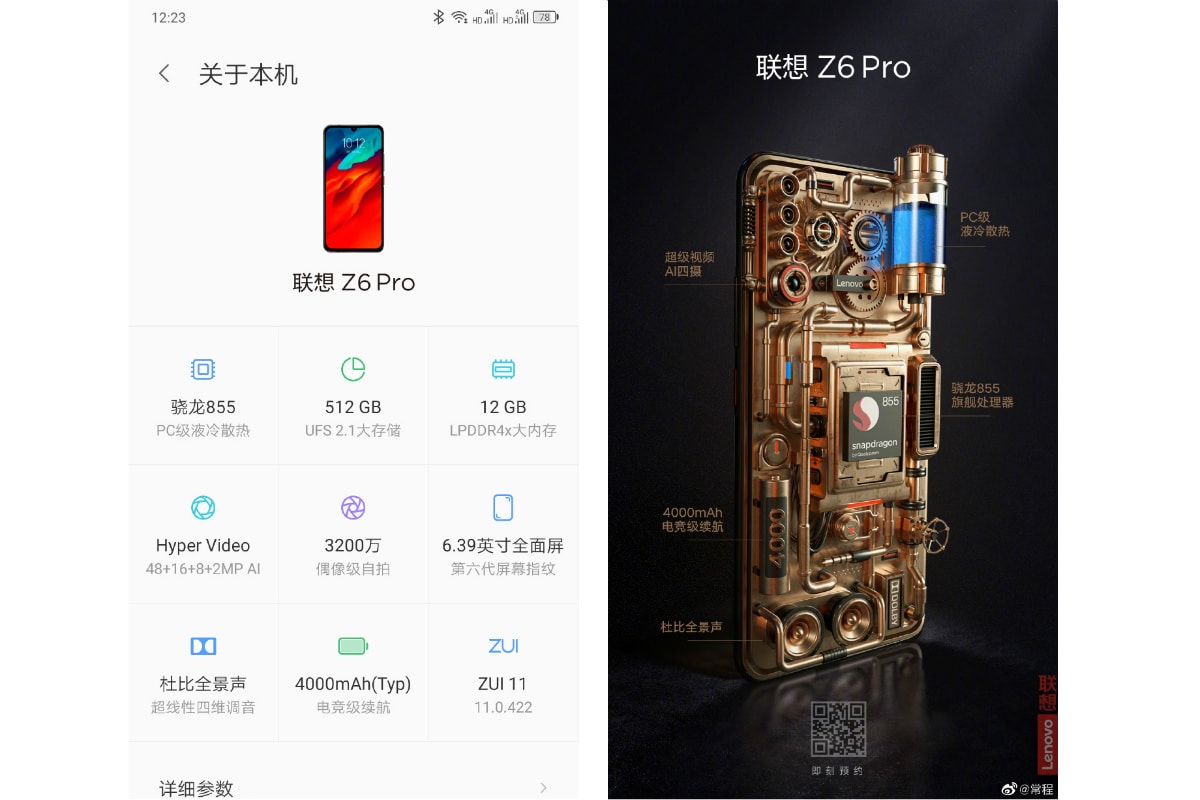 Another image posted by Cheng shows that the Lenovo Z6 Pro packs a 4,000mAh battery along with a PC-grade liquid cooling system.

In other developments, a few camera samples of the Lenovo Z6 Pro have been released on the official pre-order page. The samples suggest HDR support, top-notch bokeh effect, and the ability to capture enhanced macro shots on the Z6 Pro.

The pricing and availability details remain a mystery and we will need to wait until Tuesday, April 23 to see what Lenovo has planned for us. Until then, stay tuned to Gadgets 360.