Lenovo Z5 smartphone teasers have been very regular, thanks to Lenovo VP Chang Cheng. The smartphone's sketch teased earlier reveals that this could be the first smartphone with no chin whatsoever. Now, Cheng has published camera samples said to be from the Lenovo Z5 flaunting the photo-taking skills of the smartphone, whilst also confirming that it will sport a dual camera setup.

The two camera samples posted by Cheng on Weibo seem to have been shot at dusk and dawn when the lighting is dim. These photos, taken in poor lightning conditions, have good clarity, limited noise, and crisp detail. Furthermore, there is a watermark at the bottom edge of every photo confirming that they have been taken using the Lenovo Z5, and a dual camera icon is present in the watermark confirming of a dual lens at the back. The watermark also confirms that the Lenovo Z5 camera has AI capabilities as well. Lenovo Z5 is tipped to launch with a full screen display, and a mammoth 4TB internal storage capacity. Cheng teased that the smartphone will launch with 4TB of storage thanks to "particle technology". He claims that with this much storage, the smartphone will be able to hold 2000 HD movies, 150,000 lossless music files, and 1 million photos. 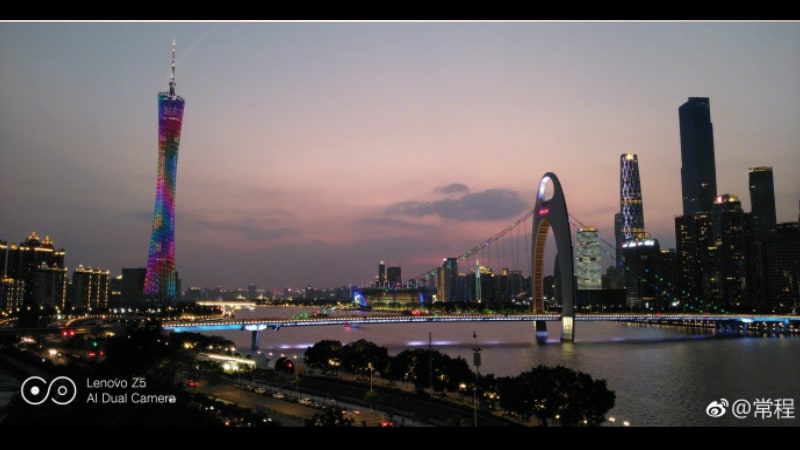 Cheng has also been sharing photos showing the smartphone's display partly. It doesn't have a notch at the top or bottom to houses the selfie camera, earpiece, and sensors including the ambient light and proximity sensor. Cheng also mentioned vaguely that the new model will include four technological breakthroughs and 18 patented technologies.

As mentioned, the Lenovo Z5 is expected to launch on June 14 and presumably specification details will start to crop up as we near the date of unveil. Looking at the specification and design details cropping up, we expect this device to be positioned in the premium smartphone range.