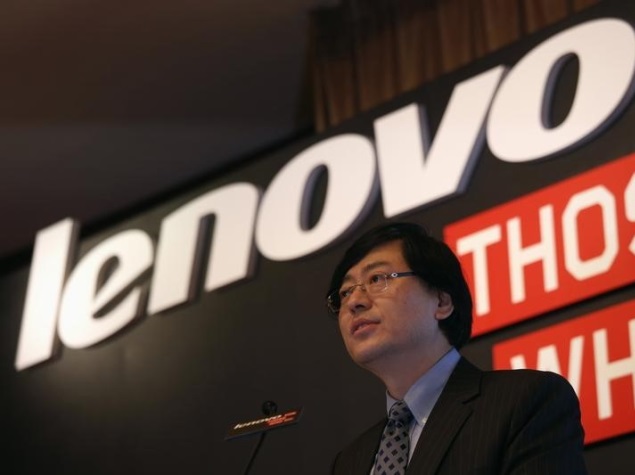 Lenovo's earnings came at a time of unprecedented competition in China's smartphone market, with rivals including fast-growing Xiaomi Inc, now the world's No. 3 handset maker. At the same time, the company is pulling ahead in the global PC industry.

The Beijing-based company now has a PC market share of 20 percent and has extended its lead over Hewlett-Packard Co and Dell Inc, according to IDC research.

But mobile device sales fell 6 percent to $1.4 billion (roughly Rs. 8,603 crores) in a rare stumble for Chief Executive Yang Yuanqing, who has been determined to muscle his way to the top of the global smartphone market.

"Smartphone revenue was not that exciting, it was a little bit of a problem," Yang told Reuters in an interview after the results. He attributed the fall primarily to an accounting procedure pushing revenue from a significant shipment of phones in late September to the following quarter.

Shares of Lenovo shed 5.1 percent after the results, compared with a 0.2 percent fall in the benchmark Hang Seng index.

"All the smartphone vendors suffer from it," Huang said. "But Lenovo fundamentally looks quite good."

Smartphones and servers
The PC market has been shrinking since the advent of tablet computers and smartphones. Lenovo has responded by diversifying, making two multi-billion-dollar acquisitions in quick succession for Google Inc's Motorola handset unit and IBM's low-end server business.

Speaking on an earnings conference call on Thursday, Yang pledged to prioritize sales growth at Motorola without looking to cut expenses. He said he expected Motorola to turn a profit in four to six quarters, and that margins in Lenovo's smartphone business will be higher after integrating the U.S. unit.

The company also on Thursday named Yahoo! Inc co-founder Jerry Yang to its board of directors. Yang, who is also a director at Alibaba Group Holding Ltd, formerly served as a Lenovo board observer.