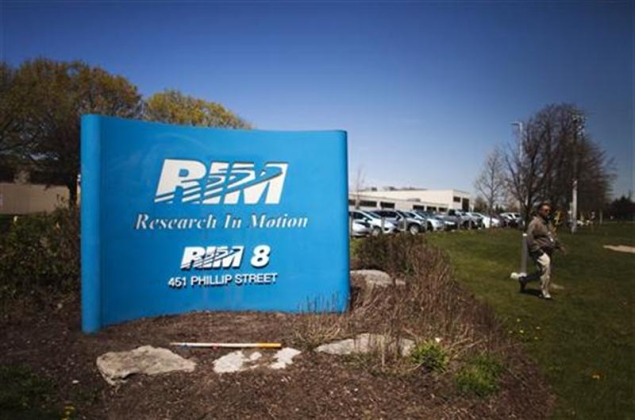 A senior Lenovo executive said on Thursday that the Chinese computer maker may consider Research in Motion as a takeover target, sending the Blackberry maker's shares up 2 percent just a week before it launches a make-or-break line of redesigned smartphones.

But Levovo, which vaulted into the personal computer market with its 2005 purchase of IBM's PC division, would face formidable hurdles if it tried to buy a company that Canadian Prime Minister Stephen Harper once described as a national "crown jewel." The Chinese company would also encounter tough regulatory scrutiny in Washington, cyber-security experts say.

Lenovo, on track to become the world's largest PC maker, has held talks with RIM and its bankers about various combinations or strategic ventures, its chief financial officer, Wong Wai Ming, said on Thursday.

"We are looking at all opportunities - RIM and many others," Wong told Bloomberg in an interview at the World Economic Forum's annual meeting in Davos, Switzerland. "We'll have no hesitation if the right opportunity comes along."

A spokesman for Lenovo said Wong was asked about RIM by the Bloomberg journalist and that Wong was speaking broadly about Lenovo's M&A strategy.

Crucial juncture
RIM, once a pioneer in the smartphone industry, has struggled in recent years as its aging line-up of devices have ceded market share to Apple Inc's iPhone and devices based on Google Inc's Android operating system.

RIM hopes its new touch-screen and keyboard devices, powered by its new BlackBerry 10 operating system, will help it claw back some of the lost ground. Optimism surrounding the launch has powered the stock higher in recent weeks.

Last May the Waterloo, Ontario-based company announced a far-reaching strategic review under which it was expected to examine all options, from software licensing deals to an outright sale of the company.

Earlier this week, RIM shares surged to a 13-month high after Chief Executive Thorsten Heins said RIM might consider strategic alliances with other companies after next week's BlackBerry 10 launch.

In an interview with a German newspaper on Monday, Heins said RIM's ongoing strategic review could lead to the sale of its handset business or the licensing of its software to rival smartphone companies.

Even so, analysts expressed skepticism about a Lenovo bid.

"Anybody who's serious about buying a company doesn't go talking it up... It sounds to me like a comment made more for publicity's sake than a serious approach for RIM," said Charter Equity analyst Ed Snyder. "It is a very long shot at the best.'

Net benefit test
Any bid for RIM would face a rigorous review by the Ottawa to determine whether the deal would bring a "net benefit" to Canada. The Investment Canada Act gives the government the authority to kill deals that could harm Canadian interests or threaten the country's national security.

In response to the comments by Heins, Canada's Industry Minister Christian Paradis told Reuters earlier this week that Canada may even go to the extent of reviewing a sale of RIM's handset business if such a deal was proposed.

"Research in Motion has made an important contribution to information and communications technology in Canada, a sector that is so important to the Canadian economy. We hope they continue to do so well into the future," Paradis said in an emailed response to the Lenovo comments on Thursday.

Lenovo's acquisition trail over the past few years, such as the purchase of Germany's Medion in 2011 and IBM's PC business in 2005, has sparked market talk that it could be interested in handset makers such as RIM and Nokia Oyj .

Lenovo executives have denied on separate occasions last year that there were such plans.

Cyber-security experts said Lenovo would likely go up against tough U.S. government scrutiny as well since the Defense Department and other agencies rely on the Blackberry, which is considered more secure than other smartphones.

Should Lenovo acquire RIM, it could lose a major client - the U.S. government - as U.S. officials would be reluctant to use products owned by a Chinese company due to national security concerns, analysts say.

"A potential acquisition of RIM by Lenovo would raise a number of important security issues," said Michael Wessel, a Commissioner on the U.S.-China Economic and Security Review Commission, appointed by Congress.

"Government employees are one of the largest users of RIM's BlackBerry products and the security of their communications has to be of paramount concern," said Wessel, adding that he was speaking on behalf of himself and not the Commission.

After the comments from Lenovo, a RIM spokesman said the company had nothing new to report on its strategic review.

Its shares are down almost 90 percent from an all-time high of over $148 in 2008, but the stock has rallied in the last four months as the launch of the BlackBerry 10 devices nears. The company's shares have nearly tripled in value since dipping as low as $6.22 in late September.