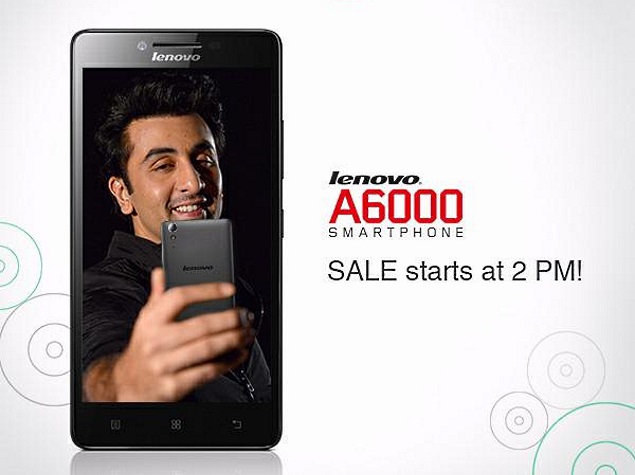 Lenovo's latest budget 4G smartphone, the A6000, will be again made available to purchase on Wednesday in its second flash sale, and with double the units that were offered last time.

The company on Wednesday tweeted saying that 20,000 Lenovo A6000 (First Impressions) will be available for purchase on Flipkart. Like last time, the sale will commence at 2pm IST for registered users.

Own the most affordable 4G smartphone of the year! 20,000 units up for grabs on @Flipkart http://t.co/UuKPtC3ptp pic.twitter.com/WEzPrv3xHf

The first flash sale of Lenovo A6000 was held on January 28, where the company claimed to have seen 10,000 units go out of stock in just two seconds. Notably, Lenovo had ahead of the first sale not revealed the total number of units that would be available.

The A6000 is powered by a 64-bit quad-core Qualcomm Snapdragon 410 (MSM8916) SoC clocked at 1.2GHz coupled with 1GB of RAM. The Android 4.4 KitKat-based smartphone runs Lenovo's Vibe UI 2.0 skin on top, and bears 8GB of built-in storage with expandability via microSD card (up to 32GB). An Android 5.0 Lollipop update has been promised, but no time-frame announced.

Army Aims to Become 100 Percent Digital With New Cloud Storage System
App Deals of the Week: Save Over Rs. 9,000