Samsung may not have announced any Android 4.4.4 KitKat update plans for its Galaxy smartphones; however, a leaked roadmap seems to have spilled the beans ahead of the official announcement from the company.

GforGames has spotted an XDA forum thread that lists the Android 4.4.4 KitKat update roll-out status of 7 Galaxy smartphones from Samsung and their variants. 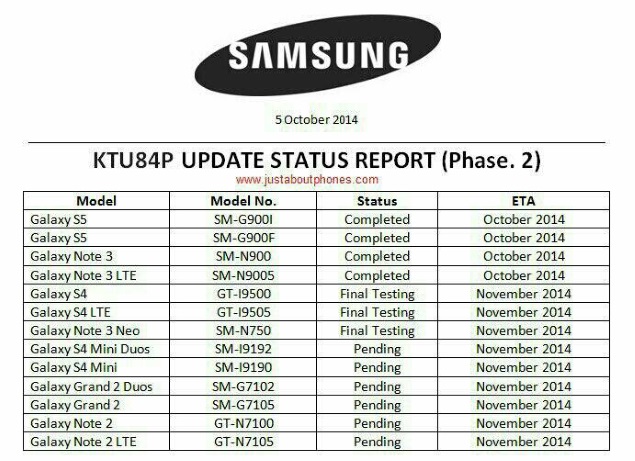 The leaked roadmap also claims that the Android 4.4.4 KitKat update for the Galaxy S4, Galaxy S4 LTE, and the Samsung Galaxy Note 3 Neo smartphones is in final testing with a roll-out scheduled for November.

Recently a report had suggested that Samsung's 2014 flagship, the Galaxy S5, along with the Galaxy Note 4, might receive the Android L update in late-November or early-December. A video claiming to show a Samsung Galaxy S5 running an Android L test build (LRW58J) with the company's new TouchWiz UI surfaced online earlier this month.