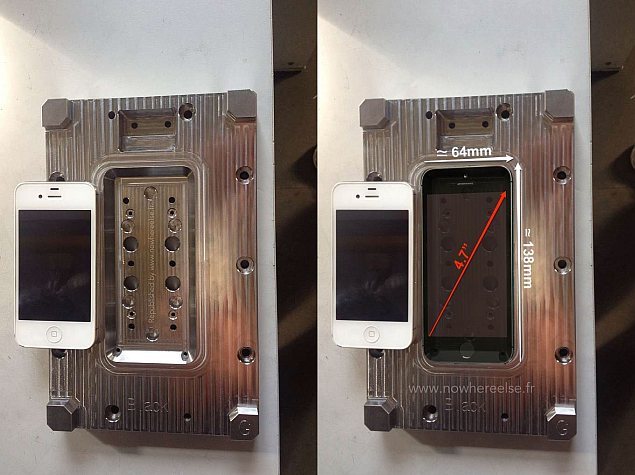 The first alleged image of the Apple iPhone 6 shows a handset mould similar to what we saw on Monday. However, the second image shows the proposed handset's front panel placed on the mould alongside the iPhone 4S, giving us some idea of its screen size.

These two images, source by French website Nowhereelse that's known for smartphone leaks, also show the approximate length and height of the smartphone's panel, which is 138x64mm, that is said to pack in a 4.7-inch screen. 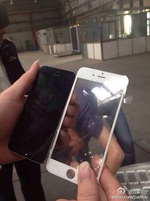 If this approximation is correct, then the iPhone 6 would be surpass the existing Apple iPhone 5s' screen size of 4-inches, a trend that is in line with various reports that suggest the upcoming Apple iPhone 6 smartphone will arrive in two screen sizes - 5.5-inch and 4.7-inch. While the high-end 5.5-inch iPhone model was previously reported to boast of a higher screen resolution at 1080x1920 pixels (full-HD), with a pixel density of 401ppi, the 4.7-inch model is said to pack a lower resolution screen at 750x1334 pixels and might offer a pixel density of 326ppi.

The third image comes from a Sina Weibo account (via Ubergizmo) showing the front panel of the rumoured iPhone 6 in white colour. The panel is held alongside the iPhone 5s smartphone and is clearly seen sporting a larger and broader screen. The panel's home button slot, top speaker grills, sensors and front-facing camera design matches to that of the iPhone 5s. Unfortunately, none of the images show the thickness of the device.

While the new batch of leaked iPhone 6 images do seem quite credible, but keep in mind that none of the images are official and their legitimacy remains questionable.