Reports have been tipping that Motorola might debut the successors of the Moto X and Moto G alongside its much-awaited Moto 360 smartwatch next month at a pre-IFA event on September 4. The former Google-owned company has also been rumoured to be working on a handset codenamed 'Shamu',believed to be the next Nexus smartphone, expected to be called the Nexus 6.

The company seems to have more planned for this year - with what appears to be a new high-end Droid smartphone leaked in mobile benchmark results. Android Authority has received some screenshots from an anonymous source showing a Motorola handset dubbed Motorola XT1254 running on Verizon and which is being dubbed Droid Turbo.

The leaked screenshots from CPU-Z, which is an app that collects data such as SoC function, system information, battery details and sensors, shows some of the specifications of the unannounced Motorola XT1254 handset. 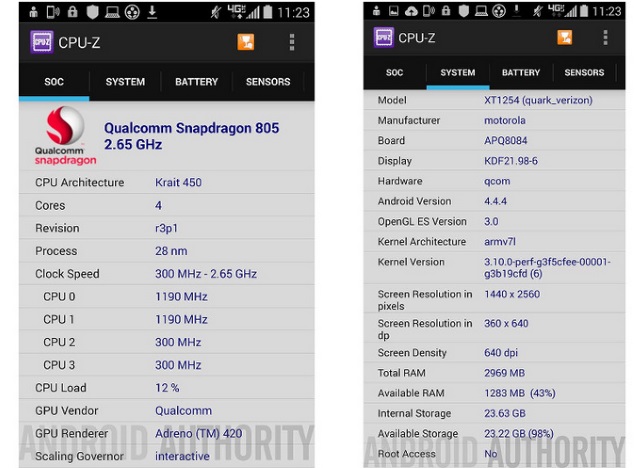 According to specifications seen in the leaked CPU-Z screenshots, the Motorola XT1254 will be powered by a quad-core Qualcomm Snapdragon 805 SoC clocked at 2.65GHz, clubbed with 3GB of RAM.

Considering that a lot of Android high-end devices and flagships - Samsung Galaxy Note 3, Sony Xperia Z2, and Oppo Find 7 - are now being launched with 3GB of RAM, it can be expected that the alleged Motorola XT1254 aka Droid Turbo will be a flagship device.

Other details visible in the screenshots include 32GB of inbuilt storage; a 4.59-inch QHD (1440x2560 pixels) display; Android 4.4.4 KitKat; a 20-megapixel rear camera, and a 2-megapixel front-facing camera.

The company started sending invites for a September 4 event, which included a cootie catcher that opened up to reveal four icons: A phone with an X in the middle, a phone with a G, a watch, and what appeared to be a Bluetooth headset.

The much-awaited Moto 360 smartwatch was briefly listed over the weekend at an online retailer with pricing and other details.