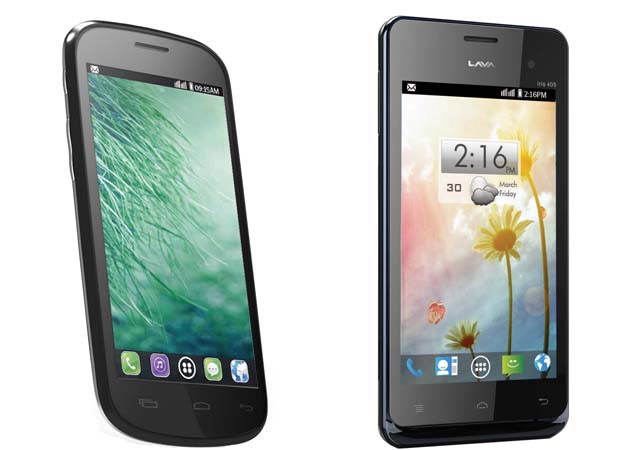 Priced at Rs. 8,699, Lava Iris 455 sports a 4.5-inch 540x960 pixels capacitive display and runs on Android 4.1 (Jelly Bean). Lava Iris 455 is powered by a 1GHz dual-core processor along with 512MB of RAM. The smartphone packs in 4GB of internal storage, which can be expanded by another 32GB via microSD card. Connectivity options include 3G, Wi-Fi, Bluetooth and GPS.

Lava Iris 455 is a is a dual-SIM dual-GSM standby phone that comes with a 1,500 mAh battery that the company claims offers up to 6 hours of 3G talk time. The phone comes with a 5-megapixel auto-focus rear camera with LED flash and a VGA front camera. The camera of Iris 455 has face detection, panorama and HDR mode.

Lava Iris 405, priced at Rs. 7,499, comes with a smaller 4-inch 480x800 pixels display. This smartphone too is powered by a 1GHz dual-core processor and runs on Android 4.1 (Jelly Bean). For camera, there is a 5-megapixel rear camera and VGA one on the front. The rear camera has 8X digital zoom and image stabilisation.

It comes with 4GB internal storage, which can be further bumped through a microSD card. Connectivity options include 3G, Wi-Fi, Bluetooth and GPS.

Both these smartphones come pre-loaded with popular apps such as Saavn, Fusion, Hike and Facebook. Lava's own Lava Zone application too comes pre-installed on Lava Iris 405 and Iris 455.

Commenting on the launch of these smartphones, S.N. Rai, Co - Founder and Director, Lava International Ltd, said "With these two new smartphones, Lava aims to provide the consumers with the best of hardware and software available today. We expect the IRIS 405 and 455 will be preferred by both students and professionals who want to get the best android experience without sacrificing on performance or features".