Lava has launched a new budget smartphone, the Iris 500, listing it on its site at Rs. 5,499. The company has yet to announce official availability however.

As per the official listing on the company website, the Iris 500 is powered by a 1.3GHz dual-core (unspecified chipset) processor coupled with 512MB of RAM. It comes with 4GB of inbuilt storage, which is further expandable via microSD card (up to 32GB).

The Iris 500 sports a 5-megapixel rear camera with LED flash, while there is a secondary 0.3-megapixel front-facing camera also onboard. The rear camera comes with several options such as HDR, burst mode, panorama, scene detection, and face recognition.

On the connectivity front, the Iris 500 offers GPRS, Wi-Fi 802.11 b/g/n, Micro-USB and Bluetooth 4.0 options. The listing does not include EDGE and 3G connectivity options, which, if not an error, would be a disappointment for prospective buyers. 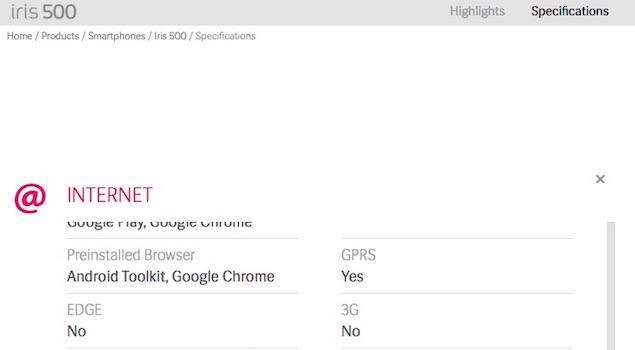 The company had also confirmed that it would launch more smartphones under the new Iris Fuel series, based around strong battery life. The highlight feature of the Lava Iris Fuel 50 is its 3000mAh battery, which is arguably the largest battery in a sub-Rs. 10,000 smartphone. Lava claims that the battery can deliver up to 13 hours of talk time and up to 360 hours of standby time on 3G networks.