The Iris 350, which was launched by Lava last week with a listing on the company's website complete with a price of Rs. 3,499, is now available to buy from an e-commerce websites at Rs. 2,999. In the meanwhile, the company seems set to launch the Iris 470 smartphone, as it has been been made available for purchase via an e-commerce site at Rs. 4,399, featuring slightly higher specifications than the Iris 350.

The dual-SIM Lava Iris 470, according to the listing, runs on the older Android 4.2.2 Jelly Bean. It sports a 4.5-inch FWVGA (480x854 pixels) resolution IPS display, and is powered by a dual-core 1.3GHz processor (unspecified) coupled with 512MB of RAM.

The Iris 470 features 4GB of inbuilt storage and can be expanded via microSD card (up to 32GB). The handset also bears a 5-megapixel autofocus rear camera with LED flash and a 0.3-megapixel front facing camera.

The Lava Iris 470 (seen above) offers 3G, GPRS/ EDGE, Wi-Fi 802.11 b/g/n, Micro-USB, and Bluetooth options. It is backed by a 1650mAh battery, which is rated to deliver up to 17 hours and 10 hours of talk time in 2G and 3G connectivity. Though not listed on the official website, the smartphone is available to buy from eBay India in its Black colour variant. 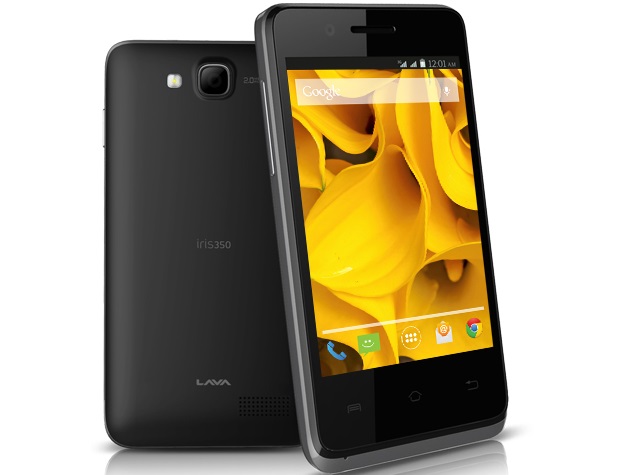 The dual-SIM (GSM+GSM) dual standby Lava Iris 350, as mentioned before, runs Android 4.4.2 KitKat out-of-the-box. It comes with a 3.5-inch (320x480 pixels) HVGA TFT display, and is powered by a 1GHz single-core (unspecified) processor coupled with 256MB of RAM.

The smartphone bears 512MB of inbuilt storage, which is further expandable via microSD card (up to 32GB).

The Iris 350 sports a 2-megapixel fixed-focus rear camera with LED flash, while there is a secondary 0.3-megapixel front-facing camera also onboard. On the connectivity front, the Lava Iris 350 offers the same options as the Iris 470. The smartphone packs a 1400mAh battery, which according to the official listing is rated to deliver up to 12 hours of talk time and up to 244 hours of standby time on 2G network. It measures 113.45x60.5x12.4mm; weighs 110 grams, and is listed on eBay India in Black colour variant.