Karbonn unveils A9+ and A21 dual-SIM smartphones with Android 4.0 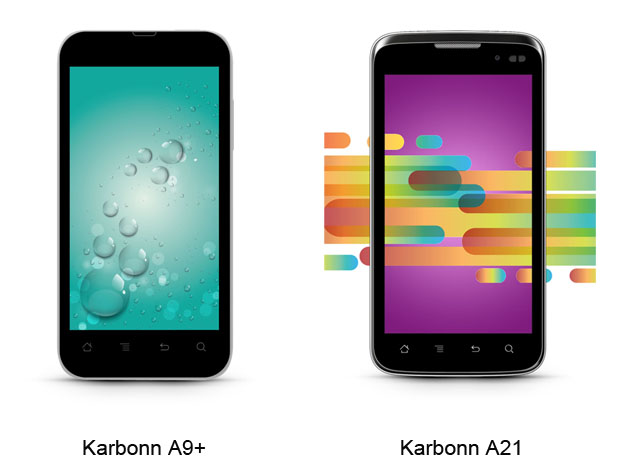 The Karbonn Smart A9+ and the Smart A21 dual-SIM smartphones, that were recently spotted online have now been officially launched as part of the company's 'Duple' series in the country for Rs. 9,990 and Rs. 11,990 respectively.

Both dual-SIM devices have more or less the same specs with differences in screen sizes and battery. The Karbonn Smart A9+ sports a 4-inch IPS display while the A21 comes with a 4.5-inch qHD display. Both have a 480x800 pixel resolution. They run on Android 4.0 and feature 5MP auto focus rear cameras with LED flash and 1.3MP front cameras.

The smartphones are powered by a 1.2GHz dual-core Snapdragon processor. While the Smart A9+ has a 1,420mAh battery, the Smart A21 comes with an 1,800mAh battery. The Smart A21 has 4GB internal storage and both devices have expandable storage options of upto 32GB.

On the introduction of the Karbonn Smart Duple Series Smartphones, Shashin Devsare, Executive Director, Karbonn Mobiles says, "Karbonn Mobiles' envisions Massifying Technology across the globe and seeks to introduce the latest in mobile technology to its consumers. Through the launch of  the 'Duple Series', we seek to solidify our positioning as a major player in the technologically advanced networked devices market, and intend to make engaged mobility solutions a reality for the consumers around the world. Understanding the evolving consumer needs and to enhance their mobile experience, Karbonn Mobiles brings to them the Duple Series smartphones with dual core processor which leads to a better gaming experience, faster browsing & lesser power consumption."

He further added, "This is also in line with the 'Duple Series' advertisement campaign which centric to Karbonn Smart's new advertising positioning, aims at connecting with the evolving Indian youth with offbeat, humorous & engaging messaging. We are confident that this new campaign will help Karbonn Mobiles to engage better with our consumers, thus enhancing the brand imagery for the smartphone segment in the market."