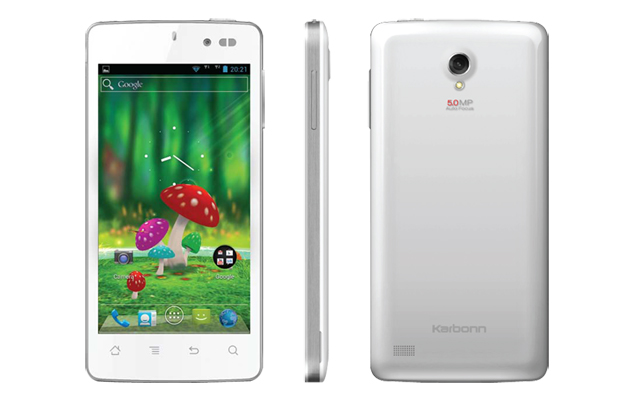 Karbonn is all set to compete with the recently launched Micromax A116 Canvas HD. A new device dubbed as the Karbonn S1 Titanium has surfaced on the company's official website. As of now only the specs are known. No retailer site has started offering the device, but we expect it to launch soon since the bookings are currently open at the company's website. (Update: The device is currently available for pre-bookings on the comapny's official website for Rs. 10,990)

The specifications of the device seem to be similar to the A116 Canvas HD. The S1 Titanium sports a 4.5-inch qHD (960×540) multi-touch capacitive touch display and runs on Android 4.1 Jelly Bean. It comes with a 5-megapixel autofocus rear camera with LED flash and a VGA front camera.

Internally, the smartphone is powered by a 1.2GHz quad-core processor with RAM detail unknown at the moment. There's 4GB of internal storage expandable upto 32GB via microSD.

Speaking about the new device Shashin Devsare, Executive Director, Karbonn Mobiles says, "We are extremely proud to be the first brand to bring smartphones enabled by the powerful and power efficient Qualcomm Snapdragon quad-core CPU processor into the country. This move reiterates our commitment to enable cutting-edge technological innovations to our consumers and is an endeavour towards providing the best in mobile technology to them. We are sure that our consumers will feel proud to own the smartphone which with its latest innovations, seeks to up their social quotient by a notch amongst their peers. Available across the country, the Karbonn Smart Titanium 1 opens up a new dimension in the Indian mobile market and enables a pioneering stride towards 'Massifying Technology' for the consumers."

Last week, Micromax launched the A116 Canvas HD with a 5-inch HD IPS display that supports an HD resolution (1280x720) and runs on Android 4.1. Other features include MediaTek's MT6589 1.2 GHz quad-core processor with 1GB RAM, 4GB of internal storage expandable up to 32GB via microSD card, an 8-megapixel rear camera with LED flash and a VGA front camera.

According to the company, this smartphone will be available for under Rs. 15,000. However, given that Karbonn is planning a sub-Rs.13,000 pricing for their HD smartphone, Micromax may be forced to do some re-thinking on the price front.