Karbonn has launched a new range of budget dual-SIM smartphones including - the Smart A52 Plus, Smart A11 Star, Smart A12 Star and Smart A50s - all of which will be available exclusively on Flipkart. The all new range of Karbonn Smart smartphones start at Rs. 2,699.

Notably, all the new Karbonn Smart smartphones are now listed on Flipkart with a 'Coming Soon' tag and offer a 'Notify Me' option for consumers.

Other specifications include a 2-megapixel rear camera; VGA front camera; 4GB inbuilt storage (expandable via microSD card up to 32GB), and a 1300mAh battery. The Smart A52 Plus does not support 3G networks. 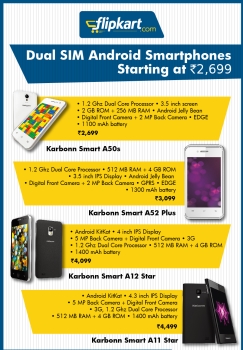 The Karbonn Smart A11 Star, on the other hand, runs Android 4.4.2 KitKat and features a 4.3-inch IPS display with a WVGA (480x800 pixels) resolution. It is powered by a 1.2GHz MediaTek processor with 512MB of RAM. Other specifications of the Smart A11 Star include a 5-megapixel rear camera; VGA front camera; 4GB inbuilt storage; expandable storage support via microSD card (up to 32GB), and a 1400mAh battery. The smartphone supports 3G networks.

Lastly, the Karbonn Smart A50s was recently listed online ahead of any official announcement. The Karbonn Smart A50s runs the now-dated Android 4.2 Jelly Bean out-of-the-box. Other specifications of the Smart A50s include a 3.5-inch TFT LCD HVGA (320x480 pixels) display; 1.2GHz dual-core MediaTek processor (unspecified chipset); 256MB of RAM; 2-megapixel rear camera with LED flash; a 0.3-megapixel front-facing camera; 2GB inbuilt storage (expandable up to 32GB via microSD card), and a 1100mAh battery. It's worth noting that the Karbonn A50s does not support 3G connectivity.

Commenting on the launch, Kalyan Krishnamurthy, SVP - Retail at Flipkart said, "It is our continuous endeavour to make technology available easily and at affordable prices to the greater masses of India. In this digital age, we believe every Indian should have access to a smartphone. These Karbonn phones that have been made exclusively for Flipkart customers are a step in that direction."

Karbonn Smart A52 Plus