iQoo series to get LPDDR5 RAM and UFS 3.1 storage. 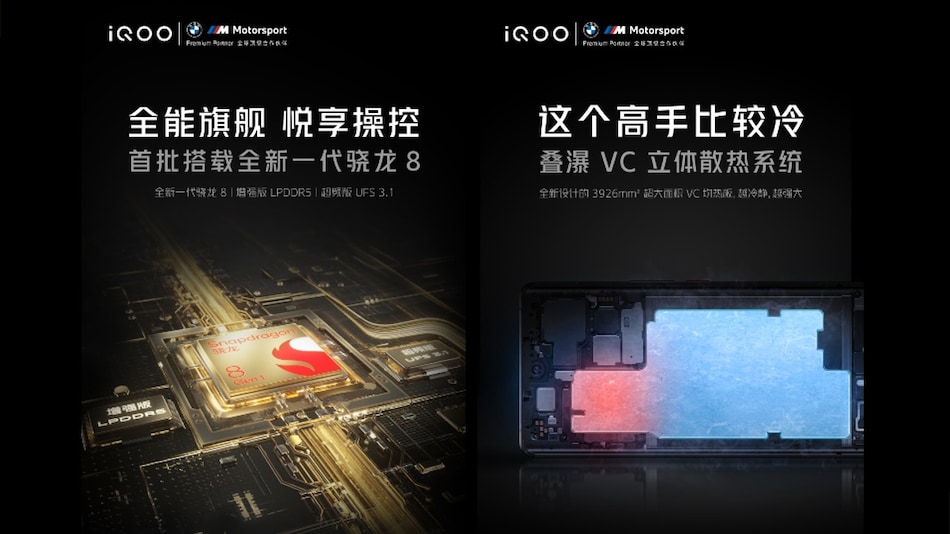 iQoo 9 Series phones will launch on January 5 in China

iQoo 9 series, which is rumoured to include the vanilla iQoo 9 and iQoo 9 Pro smartphones, will be powered by Qualcomm's latest flagship Snapdragon 8 Gen 1 SoC. The Vivo sub-brand  also confirmed that the smartphones will feature a VC three-dimensional heat dissipation system that will have a soaking plate with an area of 3,926 square millimetres. The news comes a few hours after iQoo announced that the iQoo 9 series will debut on January 5 in China, and at least one phone from the lineup will pack a 4,700mAh battery with 120W fast charging.

In a post on Chinese microblogging site Weibo, iQoo shared two images confirming that the phones - likely the iQoo 9 and iQoo 9 Pro - will be powered by the Qualcomm Snapdragon 8 Gen 1 SoC. The chipset will be paired with an “enhanced version” of LPDDR5 RAM and an “overclocking version” of UFS 3.1 storage (translated). It also says that the handsets will also pack a VC three-dimensional heat dissipation system to keep their temperature in check.

In a teaser a few hours ago, iQoo revealed the battery specifications of the series. Without naming any particular handset, the Chinese brand said that the smartphone will pack a 4,700mAh battery with 120W fast charging technology, and 50W wireless charging support. If we go by the specifications trend in iQoo 8 series, the iQoo 8 Pro has a larger battery with 120W fast charging as well as 50W fast wireless charging. It could be possible that the battery specifications belong to the rumoured iQoo 9 Pro.

Meanwhile, it has also been confirmed that the iQoo 9 series will launch on January 5 in China. The phones will feature the second generation 2K E5 AMOLED screen from Samsung, and sport a triple rear camera system.

How does the Oppo Find N improve over Galaxy Z Fold 3? We discuss this on Orbital, the Gadgets 360 podcast. Orbital is available on Spotify, Gaana, JioSaavn, Google Podcasts, Apple Podcasts, Amazon Music and wherever you get your podcasts.
Affiliate links may be automatically generated - see our ethics statement for details.
Advertisement