iQoo 5 will come with the brand’s 120W fast charging technology that is said to charge a 4,000mAh battery in just 15 minutes. 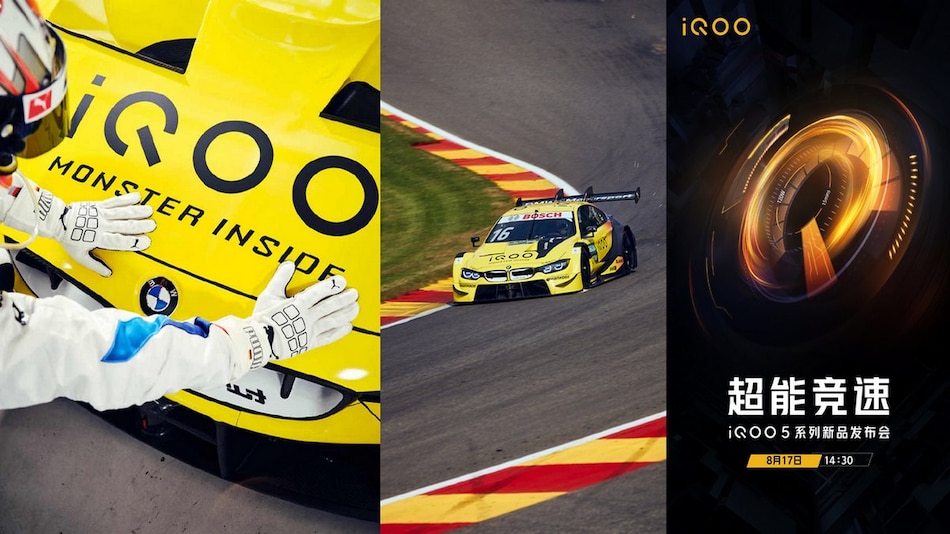 iQoo 5 BMW Edition has been teased by the brand

iQoo 5 BMW Edition may launch alongside the regular iQoo 5 smartphone on August 17. The Vivo sub-brand announced its partnership with BMW M Motorsport on Weibo through a series of posts, hinting at a special edition iQoo 5. The video and photos from the posts show a yellow livery BMW race car that has the iQoo branding on the hood. Some of the specifications of the iQoo 5 still remain a mystery beyond the 120W fast charging technology, CPU, and storage speed, and the posts by the brand do not share any details either.

One of the posts by iQoo's official account on Weibo comes with a short clip of the BMW race car in yellow with its blue headlights. It states that iQoo has become the top global partner of BMW M Motorsport, along with the August 17 release date for the iQoo 5 series. Another post comes with some more pictures of the car. These posts don't share the details of this collaboration but if it's anything like the OnePlus and McLaren collaboration, the phone will have a BMW race car inspired back panel and a software skin to go along with it.

The iQoo 5 BMW Edition may also carry top-end specifications in terms of RAM and storage.

For now, we know that iQoo 5 series will support 120W fast charging and be powered by the Snapdragon 865 SoC. Some promotional posters on Chinese e-retailer JD.com have revealed these details, along with the presence of UFS 3.1 storage.

iQoo 5 series will be launched in China on August 17 through a digital event that will commence at 2:30pm local time (12pm IST). As of now, it is unclear if it will make its way to the Indian market as the only iQoo phone that has been launched in India is the iQoo 3.