iPhone XR Is the Most 'Affordable' iPhone Model With Price in India Starting at Rs. 76,900

Apple on Wednesday put a stop on all the rumours and leaks and finally unveiled the much-awaited iPhone XR at its special event at the Steve Jobs Theater at its Apple Park campus in Cupertino, California. The new iPhone model, which is a part of the company's 2018 iPhone family, features an iPhone X-like design. It comes alongside the iPhone XS and iPhone XS Max as well as the all-new Apple Watch model. Unlike the other two new iPhone models, the iPhone XR sports an edge-to-edge 6.1-inch LCD panel that has the same display notch on top that debuted on the iPhone X last year. Apple calls the LCD the "Liquid Retina" panel. There is also Apple's A12 Bionic chip under the hood that is based on the 7nm process. The Cupertino giant has also provided Face ID through a TrueDepth camera system. Similar to the iPhone XS and iPhone XS Max, the iPhone XR runs iOS 12 out-of-the-box. The iPhone XR has been launched in 64GB, 128GB, and 256GB storage variants.

The dual-SIM, dual standby smartphone iPhone XR runs iOS 12 and features a 6.1-inch (828x1792 pixels) LCD Retina display. The display sports the notch on the top that comprises the TrueDepth camera system and enables Face ID functionality. The display panel has 120Hz touch sample rate as well as TrueTone support, and is touted to be the most-advanced LCD panel ever. However, there isn't the 3D Touch support that the company brought with the iPhone 6s back in September 2015. The new model instead has a Haptic Touch that helps users instantly launch the camera or flashlight by pressing on the home screen. Apart from a physical SIM, support for the second SIM will be offered via eSIM, with Airtel and Jio confirmed as partners in India.

The iPhone XR is powered by an Apple A12 Bionic chip that is rated to deliver a 30 percent faster app launch time. The new chip is touted to be the "industry-first 7nm chip" and includes as many as 6.9 billion transistors. Further, the chip contains a six-core CPU and a four-core GPU alongside a new dedicated Neural Engine. While the two-core Neural Engine featured on last year's A11 chip was capable of handling 600 billion operations per second, Apple claims that the new version can handle five trillion operations per second. The CPU available within the A12 Bionic is also claimed to be up to 50 percent faster than the CPU featured on the A11 chip. 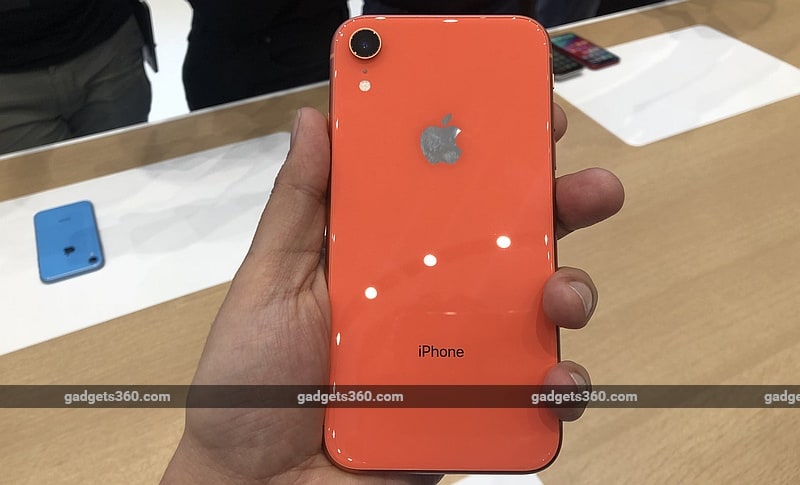 The iPhone XR has compromises such as LCD screen, single rear camera, etc to achieve a more affordable price tag

The iPhone XR has 64GB, 128GB, and 256GB storage options. Unlike the iPhone XS and iPhone XS Max that both have a stainless steel body much like the iPhone X, the cheaper model has a 7000-series aerospace-grade aluminium build. The body is also notably IP67 protected, unlike its more expensive cousins, which now have an IP68 rating.

For capturing images and recording videos, the back of the iPhone XR has a single camera sensor at the back that comes in 12-megapixel resolution and has a six-piece lens on top along with an f/1.8 aperture. The rear sensor is coupled with a quad-LED True Tone flash, coupled with an advanced flicker-detect system, and includes optical image stabilisation (OIS) and Focus Pixels. There is also a 7-megapixel camera sensor featured at the front that supports an improved Portrait mode and comes with an f/2.2 aperture, IR camera as well as a dot projector that includes a structured light transmitter, micro-projection lens, and a diffractive beam splitter. Apple has offered a Smart HDR feature that is designed to enhance results - without any edits. For the selfies, there is an Advanced Bokeh Depth Control feature that bolsters the Bokeh effect.

iOS 12 Rollout to Begin on September 17 for Compatible Devices

The frontal camera system also enables an advanced Face ID that is powered by the improved TrueDepth camera system, which includes a faster sensor than what was featured on the iPhone X last year.

As usual, Apple hasn't revealed any details on the part of battery capacity. It, however, mentioned that the iPhone XR delivers an hour and a half more than the iPhone 8 Plus. The smartphone also has a glass back, and supports wireless charging. While rumours a few weeks ago said Apple would be switching to USB Type-C to Lightning 18W charger for the power adaptor, Apple has stuck to the Type-A to Lightning 5W charger that has been in the box for the past several years. However, the 3.5mm-to-Lightning dongle will not be included in the box this time around.

"iPhone XR will allow us to deliver the future of the smartphone to even more people," Apple CEO Tim Cook said while unveiling the iPhone Xr at the Steve Jobs Theater.

Further reading: Apple
Jagmeet Singh Email Jagmeet Jagmeet Singh writes about consumer technology for Gadgets 360, out of New Delhi. Jagmeet is a senior reporter for Gadgets 360, and has frequently written about apps, computer security, Internet services, and telecom developments. Jagmeet is available on Twitter at @JagmeetS13 or Email at jagmeets@ndtv.com. Please send in your leads and tips. More
Galaga AR Announced at iPhone Xs Event
iOS 12 to Be Released on September 17, macOS 10.14 Mojave to Be Released on September 24

iPhone XR Is the Most 'Affordable' iPhone Model With Price in India Starting at Rs. 76,900
Comment
Read in: हिंदी বাংলা