iPhone 8 rumours are getting crazier by the day. A fresh report now claim that the iPhone 8 may be unveiled as soon as WWDC in June, refuting all previous claims of a delay. Meanwhile a completely unrelated report uses renders of the iPhone 8 to depict all the possible usages of the expected new 'function area' at the bottom of the device.

First the iPhone 8 WWDC rumour, which comes via JP Morgan analyst Rod Hall, who seems to have suggested that Apple will release the iPhone 8 much earlier than expected. Hall says that Apple will unveil the tenth anniversary edition at the WWDC event in June, but won't make it available before fall. This refutes all previous claims of a delay in iPhone 8 production. Previous rumours indicate that Apple is having several yield issues of its key components, and this could cause a delay in sale of the iPhone 8. Some reports suggest that the iPhone 8 will go on sale sometime before the end of the year, during the holiday season, while a recent report even suggested that the iPhone 8 won't see the light of the day until 2018.

Its not like Apple hasn't released iPhones at WWDC, but the last one was the iPhone 4 in 2010. Since then, Apple has launched all of it iPhone models in September and made them available soon after. If this report were to hold some weight, then Apple may go back to its tradition of iPhone launches at WWDC.

A separate report from iDropNews shows several renders of the device, and the images focus on multiple functions the iPhone 8 'function area'. For those unaware, the function area is the touch-based bottom chin space expected on the iPhone 8 that will enable users to do multiple things, replacing the physical button. The new function area will purportedly display multiple functions for receiving and rejecting a call, sharing options in Safari, editing options for a photo, media controls, and more, depending upon the context of what's on the screen at the time. This works on the same principle as the Touch Bar on the MacBook Pro that keeps changing based on what's on screen. 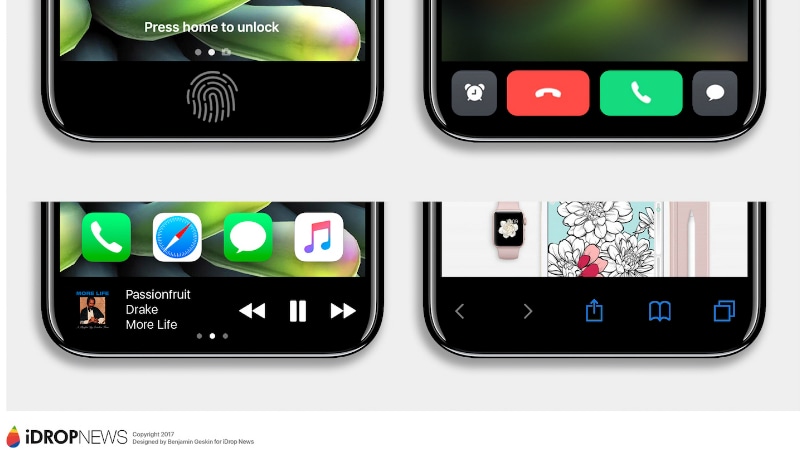 A word of caution though, these renders are based on previous schematics and leaks, so we recommend you not to take them as gospel; but they still give us a fair idea of what the function area could do on the iPhone 8, if all the rumours are true.

In any case, June isn't far away, and if JP Morgan is right, we'll see the iPhone 8 sooner than anticipated. It is expected to come with some significant features like wireless charging, new augmented reality features, OLED panel, new Touch ID, all glass back, and more.