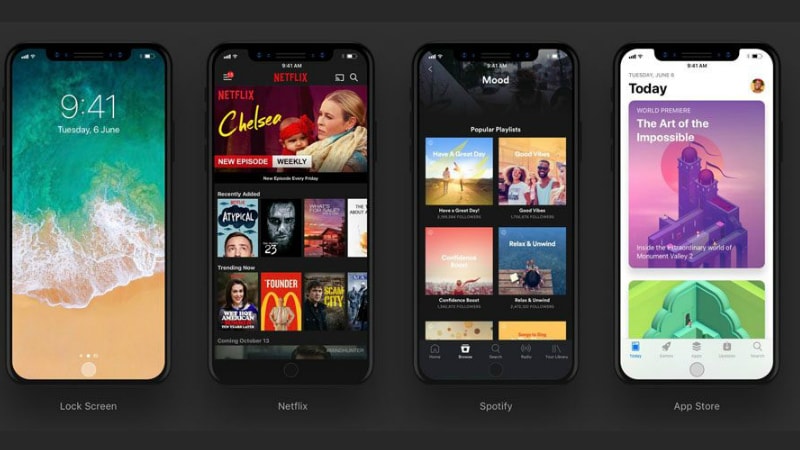 Another day, another bout of iPhone 8 leaks. Fresh tips give us a good look at how apps will work on the iPhone 8's new bezel-less display, a sketchy look at the iPhone 8 production lines, the possibility that the Copper Gold variant may be called Blush Gold, and more information on the iPhone 7s dimensions as well.

Starting with mockups from UX designer Maksim Petriv, the images show how the iOS 11 UI will morph the top lip bezel in different apps. According to the designer, the 'double notch' on top will have a different interface in different apps, some will hide the notch completely with flattened corner, another will show the battery, Wi-Fi, and network notifications in a more camouflaged manner, and the third one will be the most visible one, called 'bunny ears'. The designer has also imagined how different apps like Netflix, Spotify, Instagram, Twitter, App Store, and even the lock screen will look on the big display. One thing interesting we spotted was that the on-screen home button was visible throughout, even within apps; however the HomePod code revealed that the button would be hidden within apps.

Tipster Benjamin Geskin suggests that the iPhone 8 will be made available in Copper Gold, and it may be called Blush Gold finally. The tip is sourced from a 'Foxconn insider', and it seems rather sketchy because the premium handset is said to be offered in only 64GB and 128GB storage options. Apple has been earlier reported to offer the iPhone 8 in 128GB and 256GB storage quantities only, and it's odd that the Copper Gold variant has the storage ceiling limit of 128GB only.

Another sketchy leak comes in the form of two videos courtesy TechTastic, both of which seem to show the iPhone 8 in an assembly line in factories. The videos seem to be taken quite openly, and given that Foxconn doesn't allow its employees to take phones or any camera device into the factory, legitimacy of both of them is in question. One video shows that phones are being polished by hand, and the other video shows all of them in some sort of a messy framework, something that does not resonate with Foxconn's production sophistication. We recommend you to take both these below videos with a grain of salt. Video or not, the iPhone 8 is reportedly in mass production, and is scheduled for a launch in September.

A separate report from Giga Apple website claims that the iPhone 7s will be a bit thicker than the iPhone 7 last year, thanks to the glass casing at the back meant to introduce wireless charging. The aluminium-cased iPhone 7 measured 138.31x67.14x7.1mm, while the iPhone 7s is expected to measure 138.44x67.27x7.21mm. While the difference is rather negligible, this could mean that your covers and casing may not fit the iPhone 7s upgrade as perfectly as you'd like it, and they may end up being tight-fitted. Interestingly, the report also claims that while the camera bulge on the iPhone 7 is 8.18mm thick, the iPhone 7s protrusion will only go to 7.92mm.

The big highlight this September is going to be the iPhone 8 that is expected to come with AR features, waterproofing, A11 chipset, OLED display panel, and much more.