iPhone 8 Tipped to Use Ion-X Glass, Production Said to Be Delayed Due to Yield Issues

iPhone 8 rumours are so contradictory these days, it's hard to believe what's true and what's not. However, when the Intel comes from KGI Securities analyst Ming-Chi Kuo, you can't help but presume it's true. In a fresh note to his investors, Kuo claims that the iPhone 8 is facing several production issues, indicating that the production cycle won't begin before October or November. Also, an image leak gives us a look at the purported Ion-X glass back of the iPhone 8, while also divulging more details about the material.

9to5Mac got hold of this report, and the note suggests that Kuo is worried about yield issues with Touch ID, the 3D front camera, and even component parts to build the 'newly-designed' iPhone 8 hardware. He fears that the 'worst case scenario' could come true for the iPhone 8, and production ramp could only begin by October to November. Because of this, he is compelled to revise his shipment predictions to 80 to 90 million units, from his earlier prediction of 100 to 110 million units.

"We are seeing more evidence that the worst-case scenario forecasted in our April 19 report could materialise, where new iPhone shipments in 2H17F are revised down to 80- 90mn units from 100-110mn units (vs. consensus of 100-120mn units)," Kuo says in his research note.

If production ramp were to begin in November, early stock could be very limited, and availability till the holiday season would also be uncertain. This could all hamper overall sale numbers for that period, forcing Kuo to revise his prediction.

Another leak found on Weibo and shared on SlashLeaks is the image of the glass back casing of the '2017 iPhone'. While glass back is expected on iPhone 8, the report says that it is of the 2017 iPhone SE. This could be true, as the casing features only a single camera cut-out, while the iPhone 8 is tipped to come with a vertical dual camera setup. Furthermore, the back casing is reportedly made of the same Ion-X strengthened glass seen on the Apple Watch Series 1 models. If this sketchy image is indeed of the iPhone SE casing, it could be possible that Apple could use the same material for the iPhone 8 model as well. At this point, it's pure speculation, and nothing else. 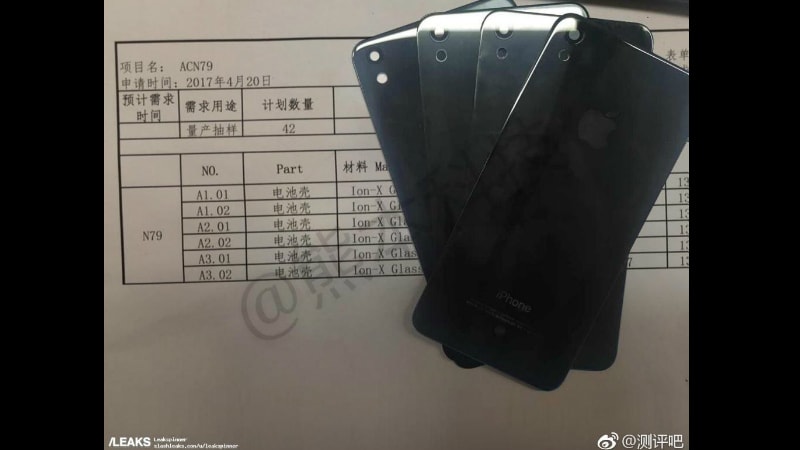 The iPhone 8, whenever it arrives, is expected to bundle AirPods inside the box, come with wireless charging, OLED edge-to-edge panel, new Force Touch, and much more.

Further reading: iPhone 8, iPhone 8 Leaks, iPhone 8 Glass Back, Mobiles, Apple
Tasneem Akolawala Email Tasneem Tasneem Akolawala is a Senior Reporter for Gadgets 360. Her reporting expertise encompasses smartphones, wearables, apps, social media, and the overall tech industry. She reports out of Mumbai, and also writes about the ups and downs in the Indian telecom sector. Tasneem can be reached on Twitter at @MuteRiot, and leads, tips, and releases can be sent to tasneema@ndtv.com. More
Google Launches Local Event Search on Its App and Mobile Website
Star Wars Battlefront 2 Up for Pre-Order in India: Price, Release Date, and More

iPhone 8 Tipped to Use Ion-X Glass, Production Said to Be Delayed Due to Yield Issues
Comment