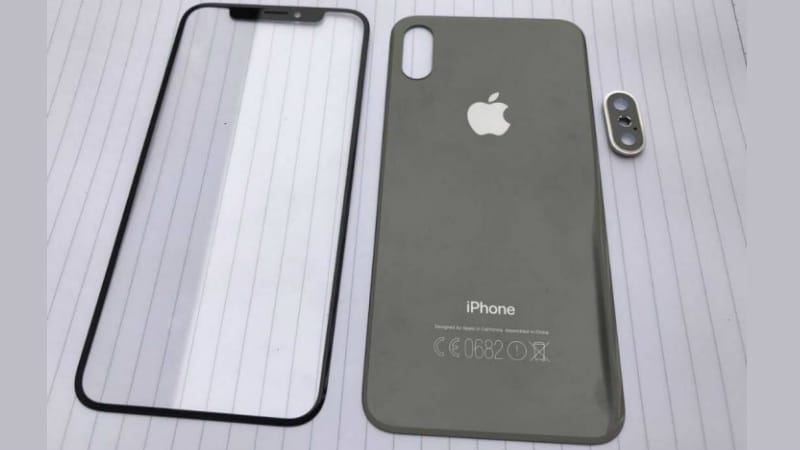 iPhone 8 renders have been leaked on multiple occasions, but now the device’s individual parts are now cropping up online. These arrive just at the time when mass production of the iPhone 8 has reportedly begun. The latest iPhone 8 leaks show us the front and back panel, the camera ring at the back, and even the metal frame of the upcoming Apple flagship.

A Reddit user named Kamikasky has posted front and back panel images of the iPhone 8, showing design iterations. He claims to have gotten hold of these from an industry source, who got it from the Chinese manufacturers directly. The leak shows that the iPhone 8 has a glass back, with the Apple logo and the vertical dual camera setup at the back. There is no cut out for the fingerprint scanner on the back panel, fortunately. The camera ring has also been leaked, and it shows places for two sensors, with the flash sitting in between the two.

At the front, there is no cut-out for a Home Button either, pretty much cementing the rumours that the iPhone 8 fingerprint sensor will be embedded into the display. Apart from the upper lip bezel for the front camera, speaker, and sensors, the bezels on the remaining three sides have been pushed back to give the front panel a nearly bezel-less look. The tipster has also leaked images of the iPhone 7s and iPhone 7s Plus back covers, showing glass frames, indicating that wireless charging is coming to all three iPhones.

Separately, the iPhone 8 metal frame has been leaked by SlashLeaks as well, giving us an idea of how the components will be placed inside the phone. The frame is compared alongside the iPhone 6 case as well, indicating that the iPhone 8 will be a little taller and wider than the older variant. Apart from this, there is little else that the frame reveals.

The iPhone 8 is also expected to be powered by the A11 chip, feature an OLED panel, have a 3D front camera, and sport some AR features as well. While some report of a delay in launch, some reports claim that the iPhone 8 is on schedule and will launch in September.