iPhone 8 Tipped to Bundle AirPods, Be Unveiled in September

There have been so many reports on the iPhone 8 contradicting each other; it's hard to pin down a clear list of what is most likely to arrive on the anniversary iPhone. The latest set of leaks look to refute previous claims of iPhone 8 designs and even banishes all reports of delay in production, claiming that iPhone 8 is right on schedule.

The first set of fresh information comes from a JP Morgan analyst claims that the iPhone 8 won't sport an edge-to-edge display, but a 5.855-inch display with thin chins on the top and bottom edges. The note obtained by 9to5Mac also suggests that the AirPods will be bundled inside the box, and that the iPhone 8 will feature a dual camera setup (12-megapixel and 7-megapixel sensors), a 3D front camera, better speakers, and waterproofing.

The research note also hints that the iPhone 7s will sport a 2.5D curved glass back, just like the OLED variant, and will also sport wireless charging capabilities. JP Morgan estimates the cost per unit of the iPhone 8 to go up by $75 to $80, but this is just bill of materials cost, and no other external factors like R&D and manufacturing are taken into account. The iPhone 8 internals image shared by JP Morgan also indicates a 30 percent larger L-shaped battery, something that KGI also argued about earlier. 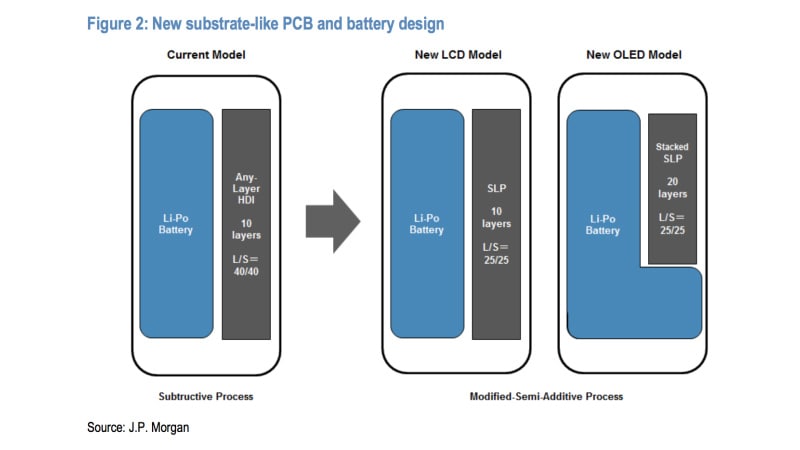 A word of caution though, JP Morgan also reported earlier that the iPhone 8 could be unveiled as early as WWDC this year in June, so we recommend you to take all of this rather lightly. Also, bundling AirPods inside the iPhone 8 seems far-fetched given that it's shipping estimate is six weeks even now, indicating low yield rates.

A separate report from Economic Daily News refutes all previous claims of a delay in production, and states that both the iPhone 7s and iPhone 8 are on track, and will be unveiled in September, and go on sale in October.

The report states that Apple has apparently improved yield of the circuit-board component - something that was considered to be one of the biggest manufacturing issues. "TSMC will begin to fabricate the wafer starts needed for the production of A11 processes on June 10 and to deliver the chips in volume quantity in the second half of July, the report indicated. Zhen Ding and Kinsus both have managed to improve the yield rates of SLP products, paving the way for volume production of the SLP materials in June," Digitimes notes, citing the EDN report.

Recent reports suggest that iPhone 8 was going through numerous technical issues and, though it may be unveiled in September, shipping will only begin during the holiday season at the very end of the year. Another report stated that the iPhone 8 won't go on sale till early next year. Even though majority of reports root for a delay, we sincerely hope that this latest one holds some weight.