Apple is known for pricing its iPhone lineup in the premium segment. In the US, iPhone 7 starts at $649 (approximately Rs. 43,000) for the new 32GB entry-level variant, while the iPhone 7 Plus start at $769 (approximately Rs. 51,000) for same 32GB storage. However, in other regions, the price fluctuates depending on the strength of their currency and their government tax rules. A fresh report lists down 33 countries in which Apple sells its iPhones in the order of how expensive they are. India, interestingly, is not too far behind the US, with the iPhone 7 just 11 percent more expensive to buy than the US, making it the 11th cheapest place to buy the iPhone 7 in the world.

Turkey was not on the top spot last year, but because of the recent turmoil in the country and the US dollar appreciation, the price of the Apple product sky-rocketed. It trumped Brazil to take the top spot, and sells iPhones at 47 percent more expensive than the US, while Brazil is now 37 percent more expensive. The only country to sell at the same price as the US is Japan. 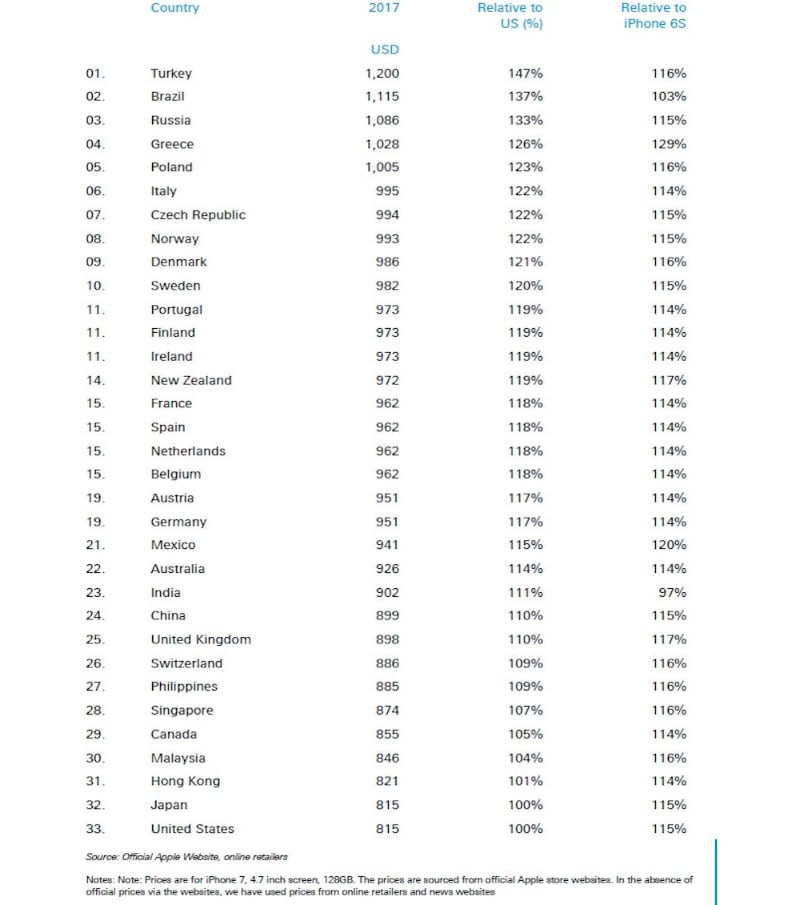 The report notes that research was done using the official price of the iPhone 7 128GB variant in different countries. Most of the prices were sourced from Apple's website, but in countries where the data wasn't available on Apple sites, prices from online retailers and news websites was taken into account. Also, it's worth noting that the report only takes into account the official prices, and different countries have a different tax treatment which means the price is not always directly equivalent.