The anticipated iPhone 7 Plus aka iPhone 7 Pro aka iPhone Pro's schematics have been leaked by a Japanese magazine, hinting at a dual-camera setup and a Smart Connector like seen in iPad Pro models. The schematics also show the omission of a 3.5mm headphone jack, something that has been rumoured for the upcoming iPhone models since quite a while. However, there is no difference in thickness compared to the iPhone 6s Plus.

According to the schematics of the 'iPhone Pro' shared by Macotakara, Apple may not drastically redesign the iPhone 7 Plus model. However, the rear camera cut out at the back panel is seen to be wider than on the iPhone 6s Plus, indicating Apple may place the rumoured dual-camera setup there. This already has been rumoured several times before.

A Smart Connector placed at the bottom of the back panel is also visible hinting a new method to charge the smartphone. Details are however scarce at the moment. This could also result in better battery cases and docks. Also missing are the antenna lines on the back panel, meaning Apple may have managed to hide them elsewhere - or that the schematics do not show antenna lines. 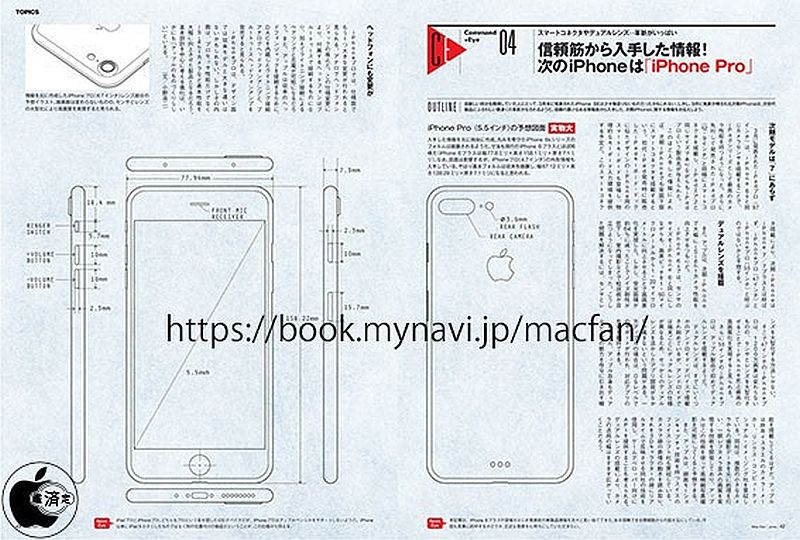 Largely, the design seen in the image will remain the same as the iPhone 6s or the iPhone 6s Plus. The front-panel and the side buttons stay the same in terms of design. Curiously, there is no cut out seen for the 3.5mm headphone jack further cementing the rumours that Apple might finally ditch the port in favour of the USB Type-C. However, while previous reports had indicated Apple would reduce the thickness of the smartphone alongside removing the 3.5mm headphone jack, the leaked schematics show the same thickness as the iPhone 6s Plus, at 7.3mm.

Since Apple is yet to confirm any of these aforementioned claims, all of them should be taken with a bit of scepticism. Intel is expected to make cellular modems for the rumoured iPhone 7 - another claim that needs to be confirmed.