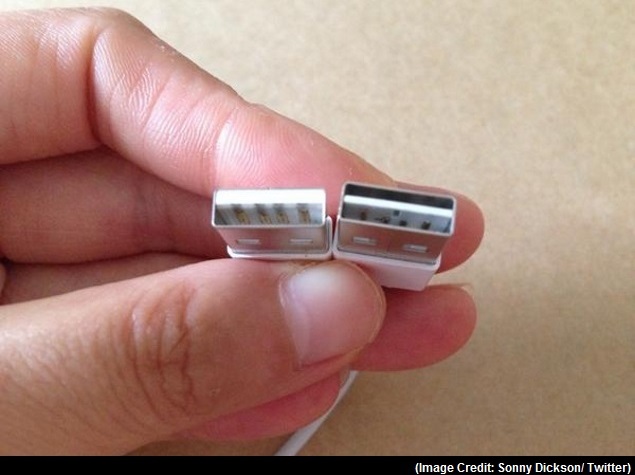 We have been treated with a new leaked image that tips Apple's next Lightning cable will have reversible USB ports of a different type than the Type-C connectors recently unveiled by the USB Promoter Group, giving iOS devices users the convenience of not bothering which way the connector is oriented before plugging it in.

Sonny Dickson, the Australian teen who made a name for himself by repeatedly leaking images of Apple's iPhone 5s before its release last year, has claimed on Twitter that the new Lightning ports for Apple's mobile devices will be reversible - and provided an image of the reversible cable connector alongside the current generation non-reversible Lightning cable.

If the rumour from Dickson turns out to be true, it would allow next-generation iOS device (such as the iPhone 6) users to no longer be concerned with plug orientation when using a Type-A port. The first device to come with the new Lightning cable is expected to be the iPhone 6. Reports also point to a patent filed by Apple in 2013, elaborately describing a reversible Type-A USB connector that's visually similar to one seen in the leaked image.

The next generation USB Type-C connector was initially announced in December last year, and will be reversible, apart from being thinner than the Type-A and Type-B USB connectors. Last week, the USB 3.0 Promoter Group provided the final specifications for the Type-C connector, and said it would only debut in 2015.

If reports about the new Lightning cable are true, Apple would once again be stepping away from the open standards set by the USB Promoter Group towards proprietary technology. As Forbes' Gordon Kelly points out, all this has several implications. It would mean that users of Apple's new Lightning cable would be able to fit the cable into all Type-A ports, but that regular Type-A USB cables will not fit into reversible Type-A ports.

As support for USB Type-B and Type-C specifications has not been hinted at by leaks or announced by Apple, it's quite possible the new Lightning cable would not fit into or support Type-B or Type-C ports, or even Micro-USB or Mini-USB ports. Kelly also speculates that if Apple is able to push consumer adoption of its Lightning cable and implied new reversible Type-A ports on its Macs and MacBooks, it might start charging a licence fee to USB peripheral makers in the future - as with the proprietary new port regular non-reversible cables won't fit in the port. It could in this way bypass the USB Type-C revolution all together.

The Cupertino giant will probably introduce the new Lightning cables at the iPhone 6 launch event - which multiple reports have indicated will be on September 9.

Last month, we were treated with leaked images of the alleged iPhone 6 internal parts that showed the flex cable for the Lightning and headphone assembly.

In addition to the new Lightning cables being tipped, alleged iPhone 6 schematics have surfaced online that indicate the smartphone will come with 1GB of RAM. The leaked schematics have been posted by GeekBar on Weibo in a post that was first spotted by Gforgames. The schematics feature the text 'POP-FIJI-1GB-DDR-BO-BGA', hinting at the memory capacity.

However, all these leaks should be taken with a pinch of salt as Apple has not mentioned anything about the upcoming device and the legitimacy of the leaks remains questionable.

Apple's next generation iPhone, expected to be called the iPhone 6, has been in the news a lot the past few months, and there has been no shortage of leaks and rumours about the unannounced handset.

On Monday, new leaked images tipped the battery sizes of the alleged 4.7-inch and 5.5-inch iPhone 6 models to be 1810mAh and 2915mAh, alongside display panel images. It was also said that the larger iPhone 6 model will be called 'iPhone 6L'

Additionally, a report claimed that the sapphire glass panels expected to be used on the iPhone 6 would enter mass production this month.