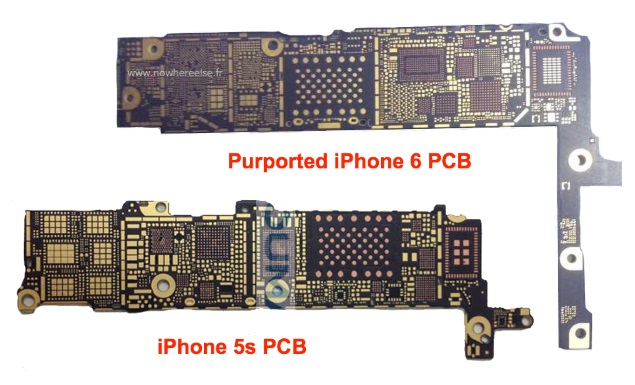 New internal components from the Apple's next generation iPhone, believed to be dubbed iPhone 6 and rumoured come in two screen size variants - 4.7 and 5.5-inches - have made yet another appearance.

The new bunch of images, the latest in a series of leaks that just won't stop, purportedly showing the 4.7-inch iPhone 6's logic board were posted by a French publication, and first picked up by MacRumors.

Nowehereelse, citing sources who shared the images of the iPhone 6 logic board, claims that the next iPhone will come with support for near field communication (NFC) and faster Wi-Fi 802.11ac. However, as MacRumors notes, the presence of neither NFC nor Wi-Fi (802.11ac) can be confirmed from the leaked internal part images .

One of the leaked images show the logic boards for iPhone 5s and yet-to-be-announced iPhone 6 in a side-by-side image comparison. Notably, the logic board for the next iPhone has a part extending towards top of the device and is much longer, when compared to previous iPhone.

It's worth noting that Apple has been long-rumoured to debut NFC support on its devices, but we are yet to see the feature on any iPhone. The adoption of NFC could be seen as a move to include e-wallet features on the next iPhone model, especially since Apple is rumoured to launch its own mobile wallet service.

Of course most high-end Android smartphones come with both NFC and 802.11ac Wi-Fi, so a bigger screen is not the only way in which the iPhone 6 will be following its Android brethren, should these rumours turn out to be true.

Last week, we were treated with images from the alleged iPhone 6's flex cable for the Lightning and headphone assembly. Following on the same lines, another image leak showed purported flex cables of the power and volume controls, alongside the flex cables for the SIM card tray.

iPhone 6 is tipped to launch on September 19, with the date having been leaked by a promotional flyer from China.

We remind readers however that nothing is official yet, and that all such leaks must be taken with a pinch of salt.

Facebook Extends Closing of WhatsApp Acquisition by a Year
JD.com to Sell Microsoft's Xbox One in China