New details surrounding Apple's next-generation iPhone devices, which leaks have thus far tipped to come in two display size variants, have surfaced online, and if they are to be believed the alleged 4.7-inch iPhone 6 might be priced lower than the current iPhone 5s.

A report emerging from China claims that the alleged iPhone 6 will be launched on September 19, very much in-line with an earlier report that cited a German carrier. Further, the report has also purportedly revealed prices for the alleged 4.7-inch model of the iPhone 6.

Apple's next generation iPhone has been making a number of online appearances and the latest in the series shows an alleged dummy of the handset sized-up against the LG G3 and OnePlus One.

Earlier leaks have shown the unannounced iPhone 6 compared with other handsets like the iPhone 5, Samsung Galaxy S5 and Galaxy Note 3. 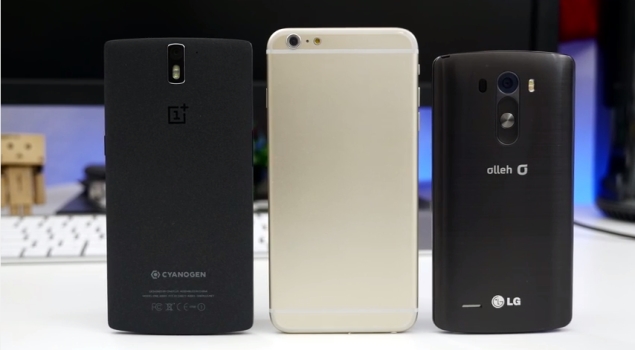 A video posted by macmixing shows the alleged iPhone 6 5.5-inch variant dummy compared alongside OnePlus One and LG G3.

The alleged iPhone 6 with a 5.5-inch display seems to be slightly bigger than both the LG G3 and OnePlus One in the side-by-side comparison, which means its bezels aren't very thin, as both those smartphones feature 5.5-inch displays as well. The alleged iPhone 6 in the comparison video also appears to be thinner than both the handsets (LG G3 and OnePlus One).

The report notes that one of the prominent reasons of the 4.7-inch iPhone 6 model not including the OIS is supply constraints. The rumoured 4.7-inch iPhone, expected to launch this year, might feature "middle-mount open-loop voice coil motor" instead.